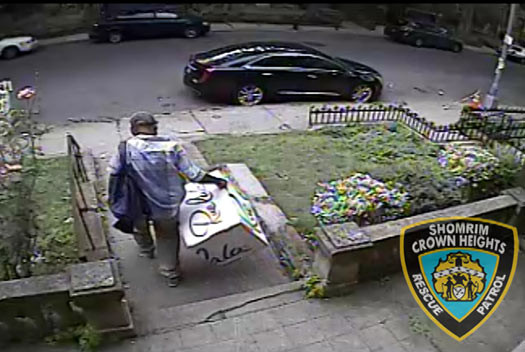 A notorious package thief – who was once arrested by the police – has been at it again, this time stealing a package worth over $800 on Carroll Street.

Surveillance video revealed why a Carroll Street resident had been waiting for their packed for over a month. The suspect, who bears a very clear resemblance to the thief responsible for a sting of thefts on the same block a few months ago, walks up to their front door and casually walks away with the large box.

Passersby can be seen in the video walking by completely oblivious to the theft taking place right before their eyes.

The victim told CrownHeights.info that she had order merchandise worth over $800 at the end of June and when July came and went she was left wondering where her package went.

Spending the summer months upstate she asked her husband to check the cameras and they quickly discovered the theft nearly three weeks later.

A police report has been filed.