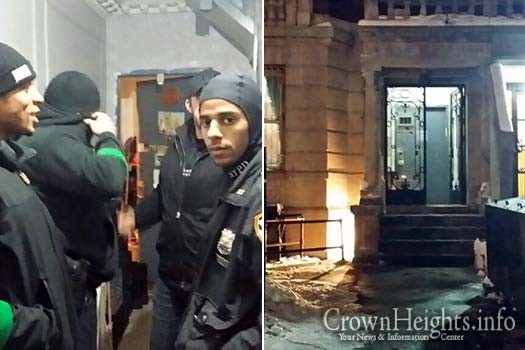 A would-be-burglar was apprehended thanks to the resident whose apartment he tried breaking into and Shomrim for following the suspect.

The incident began at around 11:15 Tuesday night when an Eastern Parkway resident heard someone ‘jiggling’ the doorknob of his front door. When he opened the door to investigate he saw a Black man who was attempting to break into his apartment.

Caught literally ‘red handed’ the man turned and fled the building. Not wasting any time the would-be-victim began chasing after the suspect while calling the Shomrim hotline.

A number of Shomrim volunteers quickly arrived on scene and spotted the suspect and began following him from a distance while calling 911. After a few minutes the suspect realized he was being followed and attempted to elude his pursuers by fleeing into the projects on Troy Avenue and Bergen Street.

One Shomrim volunteer spotted a police cruiser and flagged it down. After describing the crime the suspect was wanted for along with his clothing description and precise information where he fled to police officers entered the sprawling building complex and quickly located him and placed him under arrest.

Upon returning to the scene of the crime police officers conducted a brief investigation and decided to charge the suspect with charges of attempted burglary and trespassing.