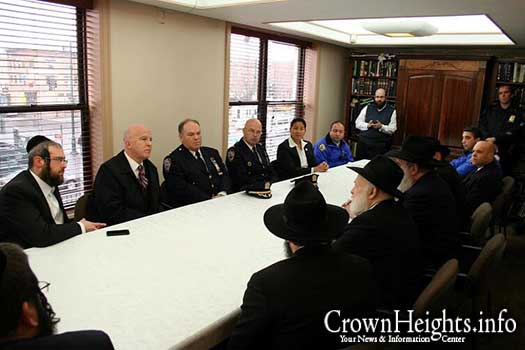 Police officials and representatives of Merkos met this morning to discuss yesterday’s incident where Levi Rosenblat, a 22 year-old rabbinical student, was stabbed and critically injured. At the meeting police were thanked for their handling of the incident, and concern over copycat incident was raised.

The meeting was held early Wednesday morning in the Merkos conference room, just a day after the horrible incident critically wounded Levi Rosenblat, a 22 year-old rabbinical student who was in the Shul after hours.

At the meeting the police were thanked for the way the officers handled the incident and subsequent shooting. Merkos representatives conveyed their concern over copycat ‘attacks’ and request the police increase their patrols and security of 770 and other synagogues.

This meet comes after the good news of significant improvement in the Rosenblat’s condition this morning.

An earlier version of this article incorrectly stated that specific security protocols were discussed.