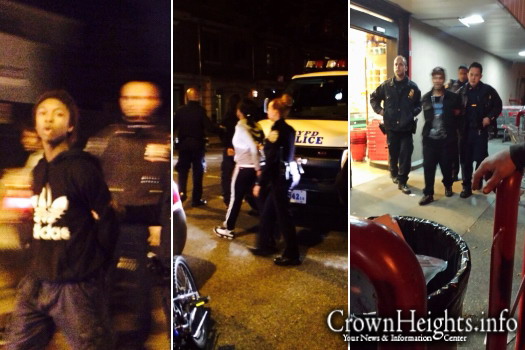 Three thieves, in two separate incidents, were arrested as a result of the hard work and vigilance of Shomrim volunteers in the span of 30 minutes yesterday, Sunday evening, in Crown Heights.

At around 4:15pm, Shomrim received a frantic call from a 13-year-old Yeshiva student walking up Brooklyn Ave. from Maple Street towards East New York Ave. that he was being chased by a group of African-American teenagers, one of whom was holding a ‘2 by 4’ plank of wood (see video below).

Shomrim volunteers were at the scene in under a minute, and kept a watchful eye over the group, while escorting the Jewish boy to safety.

While observing the group, Shomrim volunteers watched as they stole a bicycle from behind a Jewish home. The volunteers immediately called the police, then confronted the group and retrieved the stolen bicycle.

Police arrived shortly thereafter, summoned the teenagers – most of them around the age of 15 – and gave them a stern warning that any further acts of theft, intimidation or vandalism will lead to their arrest.

Barely five minutes after the group was allowed to go on their way, a 10-year-old non-Jewish girl approached the officers and Shomrim volunteers and said that her two bicycles had been stolen.

Remembering that the group they had just dismissed had two bikes among them that fit the exact description the girl gave, the cops and Shomrim volunteers immediately set out to find the group once again.

Soon thereafter, the two teenagers on the allegedly stolen bicycles – one boy and one girl – were arrested by police. The police discovered that the 15-year-old boy already had two prior arrests on his record.

One Bust Leads to Another

While they were canvassing the neighborhood searching for the bicycle thieves, two Shomrim volunteers spotted another theft in action. They observed as an adult Hispanic male stole several electric safety lights from the bicycles of students of Oholei Torah Mesivta, which were parked in front of the Yeshiva building on Troy Ave.

The volunteers observed the perpetrator as he filled his backpack with the stolen items, then made his way down Troy Ave., oblivious that he was being watched and followed.

The volunteers then called other police officers to the scene, who confronted the man inside a bodega on East New York and Schenectady Aves.

After searching his backpack and finding the stolen items, the man was placed under arrest and taken down to the 71st Precinct for booking, where the volunteers helped with the filing of a criminal report.