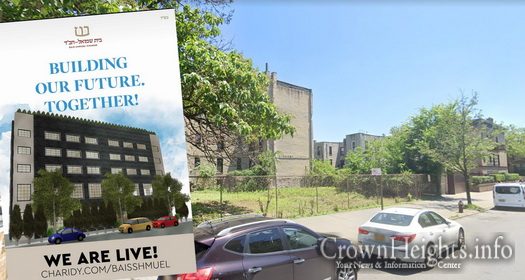 Bais Shmuel Chabad, which began as the first “Young Shul” in Crown Heights, has announced its plans to build a gorgeous new building in Crown Heights as it launches a $1 Million Charity campaign geared on getting the project started.

Photos on the campaign’s Charity donation page show a large modern building on a tree-lined street, which the campaign claims will host a Shul, Simcha Hall and Housing among other social venues. According to the campaign, the shul has procured a prime location for it’s new shul in Crown Heights, but declined to mention exactly where that will be.

So where will this shul be located?

The answer, according to those familiar with the plans, is on the corner of Union Street and Albany Ave in the empty lot directly across from the Crown Heights woman’s Mikvah.

The history behind this 5,779 square foot lot goes back to the late Rabbi Meir Roness OBM, who purchased the lot with the intent to protect the mikvah from prying eyes. After many years, the lot changed hands and ended up with The Cassidic Discovery Center, which made the purchase from Roness under the express intent of creating a Crown Heights Tour and Welcome Center, which would run as a day only venue and continue to protect the sanctity of the location.

Yet in September 2017 a transaction took place between The Cassidic Discovery Center and Congregation Bais Shmuel Chabad, according to paperwork filed, leaving the location mortgaged to the congregation.

While a modern and beautiful building façade would be a most welcome addition to the Crown Heights scenery, many are concerned over the planned social haven’s proximity to the woman’s mikvah. The imposing structure would in reality be directly facing the Mikvah’s entrance, worrying many that windows from the building and groups visiting the shul or social hall would create an uncomfortable environment for those coming to use the Mikvah’s facility.

It’s a concern that Rabbi Moshe Pinson, who is running the Bais Shmuel building campaign, told CrownHeights.info they have plans to alleviate.

“There will be a wall and trees and no windows along the side facing the mikvah,” he told CrownHeights.info. “the entrance will also be on Union Street.”

But despite these  reassurences, many are still concerned over the the enhanced traffic to the corner.

According to the campaign’s own press release, “Whether you are a high-school student, a young professional, married, single, parent, or grandparent, resident, visitor or Shliach―there is something for everyone at Bais Shmuel.” This would mean that the shul would see groups of Crown Heightsers of all ages and stripes visiting at all times of day.

Despite plans for the entrance of the building to be on Union Street, one Crown Heights resident noted that the street alongside the mikvah would become congested with double-parked cars and pedestrians.

“There will be a Simcha Hall there,” she told CrownHeights.info. “Everyone is going to park on Albany because you can’t park at all on Union. It’s going to become Grand Central at the time that the Mikvah is used most.”

In reality, it might very well be the nail in the coffin for one of Crown Heights’s longest functioning organizations. With an uncomfortable environment, most woman would choose to avail themselves to other Crown Heights woman’s Mikvahs, effectively closing the Union Street Mikvah’s doors.

Yet while many are worried, the plans for the new building are still years off and millions of dollars away.

At present, while physically empty, the lot remains burdened with a large tax lien that is yet to be paid, as well as nineteen Department of Building violations, according to city records. Also of note, the deed remains in the name of The Cassidic Discovery Center Inc at this time, bringing into question if the property was actually sold.

While $1 Million may get the project started, the planned building may be as high as $15 Million in total cost.