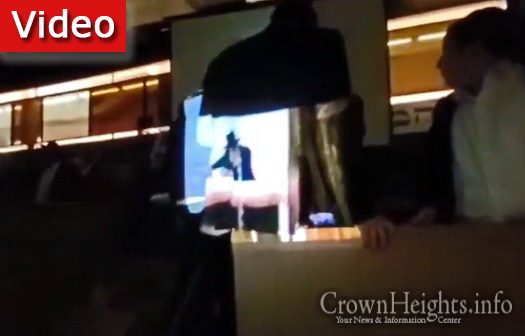 New video has emerged of bochurim obstructing a Connection Point Rally in 770 Motzei Shabbos, bringing the chain of events into clearer focus.

The enraging video shows as the bochurim block the projector screen, stopping hundreds of children and their parents from watching the video of the Rebbe.

Moments after the shooting of this video, a brawl broke out as community members attempted to remove the bochurim. Fists flew, and one person was maced.

The chillul hashem was compounded as police officers were brought into 770 to restore calm.

Parents and school administrators were appalled at the events, prompting at least one school to send out a notice of the nights events to the parents.

Under extreme pressure, the Gabboim of 770 made a rare move by published a ban on those bochurim involved, not allowing them to return to 770 for any reason.

Future events planned in 770 have also been brought into question over safety, as the ban placed on the bochurim is not a restraining order, making it unenforceable.