« South Phoenix To Get New Chabad Center
Weekly Letter: A Timely Message About Chanukah, With a Timeless Application » 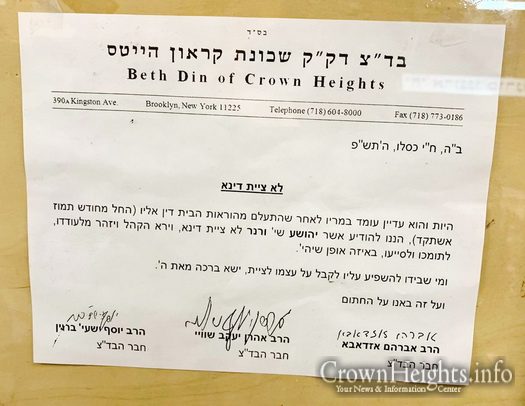 “Haigud,” which translates to ‘The Alliance’, was brainstormed months prior as a resource for the young married couples of the Crown Heights Jewish community, viewed generally as having little faith in its Rabbinical leaders. The plan partially fell apart after the young generations “Grade Shuls” were less than enthusiastic over the idea, and rejected an official alliance.

Months later, “Haigud” as a standalone organization launched it’s website and debuted in the community, apparently over the objections of the Crown Heights Beis Din.

The morning after its debut, a letter signed by all three Rabbonim of the Crown Heights Beis Din adorned the Rabbonims notification board in 770. The letter, dated Yud Ches Kislev, titled “refusal to adhere to halachik instruction” called out Rabbi Werner for ignoring instructions of the Beis Din to him, and instructing the community to refrain from supporting or encouraging him in any way.

The Beis Din also called on members of the community who are able to influence Rabbi Werner to listen and adhere to the Beis Din.

The letter posted did not give a reason for such harsh instructions, and of the posting of this article, the Beis Din has not responded to a request for an explanation.

Request for comment from “Haigud” regarding the Beis Din’s letter has also not been returned.

Rabbi Yehoshua (Shea) Werner had previously served as a Rov in Detroit before moving to Crown Heights.

« South Phoenix To Get New Chabad Center
Weekly Letter: A Timely Message About Chanukah, With a Timeless Application »