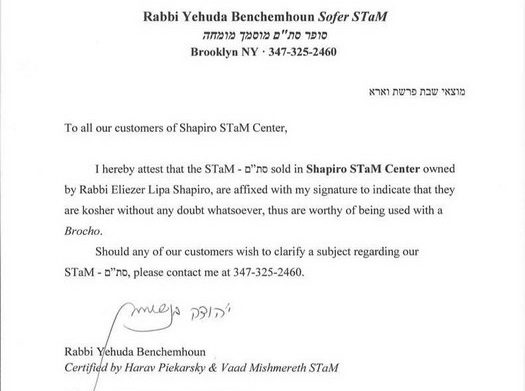 In the wake of an alleged mezuzah scandal, and a wave of public worry, Hamafitz STaM gets a Hechsher on all its STaM sold.

The alleged mezuzah scandal that rocked the Crown Heights community has brought about some change.

Rabbi Wolf of Chicago had spearheaded an video experiment that labelled many Sofrim and establishments selling STaM in Crown Heights as selling not kosher mezuzos.

The stores and individuals targeted fired back, publishing statements that the creator of the video was bias, showing inconsistencies in the video. They also staunchly hold that the mezuzos are not pasul, and that the Halachos spoken about in the video are being improperly used.

In an attempt to grow confidence and stop any worry, Hamafitz STaM has received a letter signed by Rabbi Yehudah Benchemhoun certifying all STaM sold by Hamafitz STaM as kosher. In his letter he writes that there is no doubt as to the kashrus of the STaM, and are worthy of being used with a Brocho.