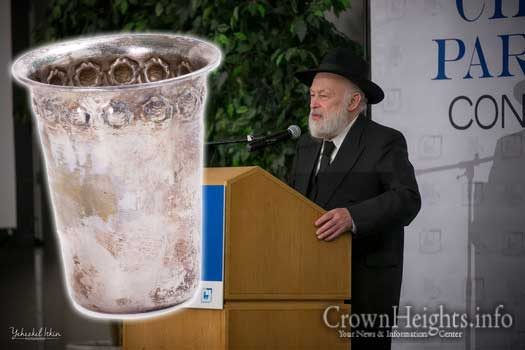 An auction for a silver Kiddush Cup (Becher) that purportedly belonged to the Lubavitcher Rebbe has been called into question after Rabbi Yehuda Krinsky denied that he authenticated it.

An auction for a silver Kiddush cup, or Becher, that purportedly belonged to the Lubavitcher Rebbe, was set to be auctioned off by the Kedem Auction House in Jerusalem, Israel.

The auction carried an authentication, saying “enclosed is a certificate by one of the Rebbe’s close attendants, ascertaining that this cup was indeed used by the Rebbe for a long period of time.”

The certifications included photographs of the item with a hand written note stating that it real and bearing the signature of Rabbi Yehuda Krinsky.

At a Kinus for the Shluchim in the New York region on Monday night, Rabbi Krinsky spoke about the auction and called his authentication a fraud.

“I heard about [the auction] just today… something about a neches [possession] that is claimed to have been to the Rebbes, a kos, a becher, an alleged silver becher, that was going to be auctioned off in Eretz Yisroel at an auction house by the name of Kedem,” he said. “When I learned about it and that they used my name to authorize its identity and its provenance – it was a fraud, so before I came here tonight, I sent off an email to the auction house and notified them not to do that.”

As of this morning the auction listing has been marked inactive, though appeared to still be active on other sites.

In a press release a head of the auction Maron Eran, owner of Kedem Auction House, declared that “This is a magnificent historic item with profound sentimental value. This becher is symbolic of the great zechus acquired by those who were fortunate to bask in the presence of the Lubavitcher Rebbe, and to the limitless bounty that he bestowed upon each and every member of Am Yisrael.”