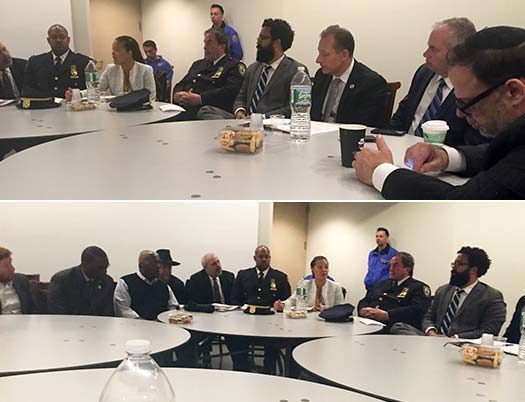 A meeting between the mayor’s office and activists and leaders from both the Jewish and African-American communities met to discuss a recent spike in hate crimes against the Jewish community, and allay community fears of growing racial tension.

A school bus arson in front of Crown Heights’ largest Jewish girls school immediately prompted community fear that it was motivated by hate and anti-Semitism, a fear which was validated when detectives with the NYPD’s Hate Crimes Task Force charged an 11-year-old boy with criminal mischief and arson, both as a hate crime, and sought five more in connection with the incident.

Despite the first child being uncooperative, a crime stoppers tip led police to another 11-year-old and then three more children, 12 and 14-years-old – all of whom were arrested and charged with the same crimes, arson and criminal mischief as a hate crime.

The following day the NYPD dropped all the hate crimes charges brought against the children.

Citing a “police source,” JP Updates wrote “detectives argued that the first 11-year-old boy who was arrested, admitted to the detectives that he knew he was burning a Jewish school bus. He was asked by investigators if he knew what he was doing, with the boy answering that he did,” and later adding that once arrested the “four other boys denied that the reason they set the bus on fire was because it was a Jewish bus when questioned by investigators. They said they were looking to have fun and found an unlocked bus, taking the opportunity to burn it.”

A police official told JPupdates that they still believes the action was motivated by bias, but that the young children changed what they said once they saw the seriousness of the case.

Surveillance video also revealed that the children came prepared with cardboard boxes “that fact alone negates the assertion that they simply ‘happened upon an unlocked bus’ rather setting out with the premeditated intention to set this bus on fire,” said a community activist.

Jewish residents of Crown Heights reacted with outrage, calling on the ‘leadership’ to put pressure on the police, while others decried the message being sent to the arsonists. “With all due respect what message are we giving them? They damaged a piece of someone’s property! Come on where is the justice?” wrote a resident.

Others predicted that this would be another opportunity for more photo opportunities.

On Tuesday evening representatives from Mayor Bill de Blasio’s Office – including Marco Carrión and Pinny Ringel – the NYPD, and the city’s law office, gathered in the Jewish Children’s Museum for a meeting with “community leaders” to discuss the bus arson and other troubling incidents targeting the Jewish community.

Mr. Magrone discussed the bus arson incident along with a number of other incidents believed to be hate crimes, including one where a Jewish student was punched on Eastern Parkway and another where a brick was thrown at a Jewish school bus a few days before the arson incident.

He elaborated, saying they believe the bus arson to be serious crime and that the police are taking it very seriously.

One of the participants asked if the police see the increase in hate crimes as a trend, Deputy Chief Charles Scholl responded that the statistics do not support that and they believe the incidents to be isolated from one another. Responding to the opinion that they were just being kids and that charges as severe as hate crime were not warranted, Chief Scholl joked that if it weren’t classified as a hate crime the room they were in would have been much more full.

Yaacov Behrman, an activist within the younger Jewish community, asked what would the practical difference be had the suspected arsonists been charged with a hate crime. A representative from the New York City Corporation Counsel said that a family court judge would take all the details into account and implied that it would have made little difference, adding that the purpose of family court is to rehabilitate and not necessarily incarcerate.

Also present at the meeting were a number of leaders and clergy from the black community who said that they did not believe the arson incident was a hate crime and it was just an act of mischief by a bunch of children, and added that the relationship between the Jewish community and the black community is very strong.

Devorah Halberstam related that she was attacked by students who attend the same school as those who were charged with the arson of the school bus. She had been driving past the school when rocks were thrown at her car and caused damage. After identifying those involved, she said the parents had promised to pay for the damage – which they never did.

Everyone at the meeting agreed that the parents should pay for damage their kids caused to the burned school bus.

Speaking to CrownHeights.info, Rabbi Benji Stock, administrator of Beth Rivkah, said “I am shocked that this meeting took place and no one from Beth Rivkah was called to attend, I didn’t even know about the meeting.” He added that after the arson incident reporters and news stations all called him, but not a single representative from the city or the mayor’s office reached out.

The meeting concluded with a pledge by the city to reach out to the area schools and increase education to foster good relations between the Jewish and African-American community, although this pledge was deeply undermined by the fact that no principals of any of the neighborhood’s Jewish or public schools had been invited to the meeting.