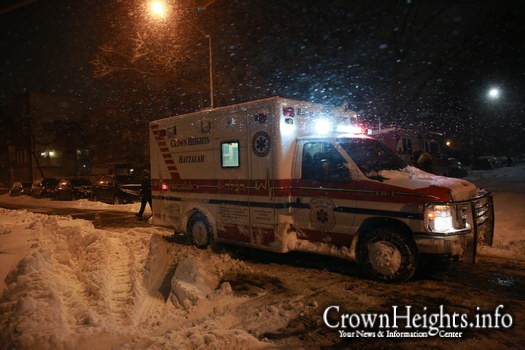 A man in his 50’s out shoveling snow after this weekend’s blizzard, suddenly collapsed. Hatzalah was called and with the help of a Shomrim volunteer together they managed to resuscitate him.

The incident occurred on Lefferts Avenue and Troy Avenue at around 8:30pm, when a non-Jewish man in his 50’s suddenly collapsed while shoveling snow outside his apartment. A member of his Jewish landlord’s family witnessed the incident and immediately called Hatzalah.

A Hatzalah member happened to be right nearby as the incident occurred and quickly sprang into action. Checking for a pulse he realized that the victim was suffering a heart attack and began assembling his defibrillator.

Another neighbor, who is also Shomrim volunteer, joined in assisting the lone Hatzalah member by starting CPR. Together they managed to ‘shock’ the victim and revive him.

As additional Hatzalah members began arriving on scene they rushed the victim to Downstate Medical Center where he is listed in critical condition.

The victim’s family, who witnessed the incident and the efforts to revive him, thanked Hatzalah and Shomrim profusely – and making a major Kiddush Hashem.

A few minutes before the victim collapsed other Shomrim volunteers, who were out in a plow truck, assisted in getting Hatzalah’s CH-4 ambulance out from its parking spot in front of Empire Shteibel. “It is literally a series of fortunate events” a Shomrim volunteer said.