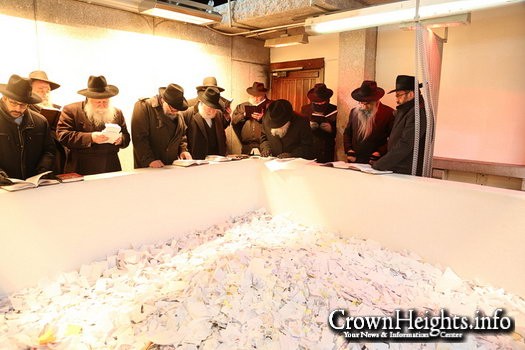 Members of the Oholei Torah board at a recent visit to the Ohel with Rabbi Joseph Rosenfeld. Archive Photo.

A months-old rift between the administration of Oholei Torah and their board of directors became public this morning when students’ parents awoke to find a flurry of e-mails from both sides awaiting in their inboxes.

A letter from the board of directors stated that “rumors about a disagreement between the Board of Directors and Rabbi Rosenfeld […] are accurate.” The letter goes on to claim that the administration is attempting to “take the Mossad private.”

A second email from Rabbi Joseph Rosenfeld, the school’s executive director, contained a letter from the Crown Heights Beis Din that was signed by Rabbi Avrohom Osdoba. In the letter, he notes that “this letter follows three summonses and a warning letter […]. In letters that you sent in recent days indicating that you intend to take matters to secular courts and state authorities, I have to clarify the danger and serious prohibition against doing such things.”

Rabbi Osdoba further indicated in his letter that “in recent days you have tried making changes in the Mossad, and in money matters connected to the recent Charidy campaign. It is on me to clarify that there is an Eikul [halachik restraining order] against doing any such things that is still in effect.”

This board was expanded eight months ago at the insistence of Rabbi Rosenfeld in the wake of the Call of the Shofar scandal that affected many of the school’s faculty and leading to the firing of two teachers.

First indications that something was amiss came after Oholei Torah’s longtime dean, Rabbi Hershel Lustig, “retired” and the board along with Rabbi Rosenfeld announced the hiring or Rabbi Michoel Druin as the new interim dean.

Organized outcry and pressure on Rabbi Rosenfeld led him to walk-back on the hiring of Rabbi Druin and calling the board to a Din Torah, exposing a rift between the administration and the board. Over the course of a few months, a number of Din Torah summonses were sent to the board, and recent attempts to quell the dispute were rebuffed.

In the Monday morning letter from the board they alluded to the fact that this fight stems from them dismissing the 8th grade principal, Rabbi Sholom Goldstein, who is a grandson of Rabbi Rosenfeld, and claiming that “it seems like Rabbi Rosenfeld’s paternal instincts clouded his judgment and he was convinced to throw his weight behind a campaign to oust the Board.”

Matters took a major turn for the worse following the school’s recent successful fundraising campaign, in which more than $2 million was raised for the institution, prompting people involved in the dispute to begin sending messages on social media and messaging apps making all sorts of allegations about their rivals.

As a P.S., the board alleged in their letter that money raised in the campaign was not deposited in the “operating account of Oholei Torah,” rather it was “deposited in a new account that was not supervised by either the board of trustees or the controller of the Yeshiva.”

School administration sources responded to our requests for comment by saying that a comprehensive statement from Rabbi Rosenfeld is forthcoming.