« Here’s My Story: From Despondent to Confident
Charedi Newspaper to Arabs: Don’t Stab Us, We Don’t Go to Temple Mount » 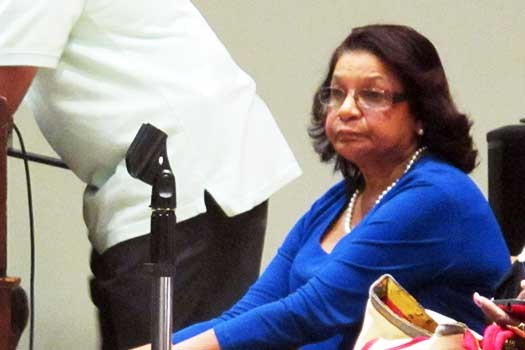 Longtime district manager of Brooklyn Community Board 9 Pearl Miles was ousted yesterday, and she has since filed a multi-million dollar lawsuit against Brooklyn Borough President Eric Adams, claiming he and others schemed to discriminate against her based on her age.

Ms. Miles, who is 66 years old, has been serving as the board’s district manager for 22 years – until yesterday. During the board’s monthly meeting a vote was held to remove her based on allegations of “misconduct” and “unprofessional behavior.” The vote passed 33 to 7, with 3 abstentions.

Later that same day, Miles filed a multi-million dollar lawsuit in federal court claiming that she was discriminated upon based on her age.

Members of Brooklyn Community Board 9 voted Tuesday to remove their longstanding top administrator, following hours of debate and a year of controversy surrounding the board’s handling of a rezoning proposal in the area.

District Manager Pearl Miles has been stripped of her title “effective immediately” after 30 years of service, said board chairman Demetrius Lawrence after the vote Tuesday night. Thirty-two board members voted to remove her, he said, with seven “no” votes and three abstentions.

The board considered the decision in a two-hour, closed-door executive session during a monthly full board meeting held at M.S. 61 in Crown Heights in which Miles was given a chance to respond to a letter of intent to remove her sent by Lawrence and CB9’s top leaders last week.

The letter claimed Miles engaged in “a longstanding pattern of misconduct,” “unprofessional behavior” and has left locals feeling that she is “gravely out of touch with the community that she is employed to serve.”

Those charges have also been leveled at Miles by the local activist group Movement to Protect the People, who repeatedly asked for her resignation in the past year as the board considered a controversial request to the Department of City Planning to begin a rezoning study in the district, including Crown Heights and Prospect-Lefferts Gardens.

During that time, Miles became the focus for near-constant protests by MTOPP at CB9’s monthly meetings, particularly after she was found to have incorrectly recorded the result of a key vote on the rezoning issue, altering the outcome of the measure.

As the vote was announced after 11 p.m. Tuesday night, members of MTOPP, including its controversial leader Alicia Boyd, broke out into applause and cheers; Lawrence immediately called for order.

“This is not a celebratory moment,” he said.

Boyd, speaking from the middle of the auditorium, shouted back: “Speak for yourself.”

The letter to Miles did not directly address the rezoning controversy, but sources on the board said the effort to remove her started months ago, at the height of the debate over the land use issue.

After the vote, Miles did not publicly address the allegations against her, asking only that she be given three days to clear out her office.

Speaking to DNAinfo later, she said “there was no supporting documentation” for the allegations against her and said she plans to file a lawsuit against the board over the removal.

“I am an excellent district manager. I know my job,” she said.

In her role, Miles was responsible for organizing the board’s monthly meetings, keeping its records and conducting business at the board office on Nostrand Avenue. She served as assistant district manager at CB9 for eight years and 22 years as district manager. As a city employee, she was paid $124,180 last year, according to public salary data from the Empire Center.

Following the vote Tuesday night, Lawrence appointed seven CB9 members to head up a search committee to find a replacement for Miles, which will begin work this week to find appropriate candidates, he said.

The ousted long-time district manager of Community Board 9 in Brooklyn says Borough President Eric Adams seemed to have schemed to have her canned because at 66 she was “too old” for the job, according to a $10 million lawsuit.

The board — half of which is appointed by the borough president — fired Pearl Miles late Tuesday even after Adams, his senior advisor and several board members had already been served with the federal suit.

“You would have thought that being served they would have delayed the vote but around midnight they fired her,” Miles lawyer, Tamara Harris, told The Post. “She was fired without cause. It was a matter of her age, and Eric Adams wanted her out.”“Now that it’s a reality that strengthens our case.”

Miles, who served as district manager for 22 years following eight as an assistant, claims that Adams worked behind the scenes to forced her ouster — even though as a state senator in 2011 he wrote a glowing commendation of her, the suit claims.

“I was told, you’re too old. You need to retire,” Miles told The Post, referring to Adams’ allies on the board. “Ever since Eric Adams came into office I feel they have been trying to get me out.”

The trouble began in January 2014, when Adams advisor and co-defendant Ingrid Martin told then-board chair Jacob Goldstein that she wanted Miles fired “because plaintiff was reportedly too old and she wanted to replace plaintiff with someone younger,” the suit says.

Goldstein refused, telling Martin firing someone because of her age was illegal — and that Miles was good at her job.

Adams then told Goldstein, who served in that post for 31 years during an April 2014 meeting in Borough Hall that he’d be voted out as chair unless he played ball.he played ball and voted for Miles’ ouster, Goldstein told The Post.

“I am borough president, what I say goes, and you listen to me,” Adams said, according to an affidavit from Goldstein.

“Pearl is an exemplary public official. She knows city government inside out and how it functions. Board 9 is blessed to have her as a district manager,” Goldstein said in the document.

“I’m outraged. The charges are specious. I dare them to come up with something in her personnel file that’s negative against her,” Goldstein added Wednesday.

In fact, she received “30 awards for exemplary service” — including the one from Adams.

“The board acts as a puppet of Mr. Adams,” the suit states, adding that he has padded the board with 25 “handpicked” members loyal to him.

But even before the meeting, defendant Demetrius Lawrence cut off her email on orders from Adams, the suit states.

Miles is seeking $7,500 in compensatory damages and $10 million in punitive damages for “pain and anguish.”

A rep for Adams said the office does not comment on pending litigation.

« Here’s My Story: From Despondent to Confident
Charedi Newspaper to Arabs: Don’t Stab Us, We Don’t Go to Temple Mount »