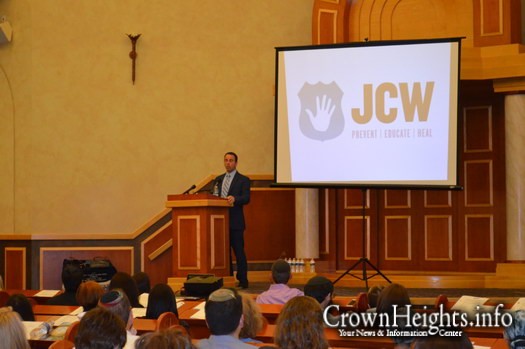 150 men and women filled the main sanctuary of Chabad of Boca Raton earlier this week for a night of awareness and education of child abuse (CSA). The highly charged event served as an opportunity to show support to victims of abuse and to educate the public about the dangers of abuse.

The event was organized by Jewish Community Watch, an organization committed to raising awareness and preventing child sexual abuse in the orthodox Jewish community and helping survivors heal.

Miami resident and entrepreneur Eli Nash, a survivor of CSA was the emcee for the evening. Between speakers, he recounted the abuse he suffered as a child and credited JCW for helping him heal and share his story. Nash emphasized that “there is no explanation or reason in the world an adult can give for touching a child”.

Rabbi Shais Taub, who is world renowned for his work and writings in the field of addiction recovery spoke movingly, drew parallels and lessons from the Torah portions of Bereishit and Noach which we are reading now. He described to the crowd the strong need many survivors of abuse have to be constantly distracted, this leads many to substance abuse and addiction. Rabbi Taub estimated that 90% of the people he deals with who have severe addictions were victims of child sexual abuse.

David Schottenstein an entrepreneur and philanthropist also addressed the crowd. He was recently interviewed on video about the abuse and attempted molestation he suffered as an eight year old camper. The video which was posted on YouTube has close to 8,000 views. David recounted his experience and how JCW helped him. He urged others to also turn to JCW for help.

Farley Weiss, an attorney who serves as president of the National Council of Young Israel said that only 10% of people charged with abuse are put in jail. He advised that in his experience, people should not rush to judge an alleged child sexual offender favorably.

Rabbi Efrem Goldberg, Senior Rabbi at Boca Raton Synagogue concluded the evening by saying: “We as the Jewish community have to beg forgiveness from the victims of abuse, whether rabbis, leaders, or a neighbor who suspected something and didn’t say anything, the community as a whole let down and failed the vulnerable whom we have such a great and awesome responsibility towards. We have to learn from tonight to make sure we have an absolute commitment that this never happens again.”

After the event, Gregory Schiller Assistant State Attorney, SVU – Predator Enforcement called the evening “profound” and praised JCW for organizing and event in which “community members from all types of Jewish affiliation got to learn about sexual abuse, in order to protect their children, from experts in the field and victims.” He also praised JCW for encouraging victims of sexual abuse to go to the police and go through the judicial process.

Meyer Seewald, founder of JCW and chairmen of the board, said after the event “JCW is a community of people who care and we are growing stronger and stronger. Together we are breaking down barriers. Every time I see yet another community leader take a public stance in support of survivors and against CSA, it strengthens my belief that we do live in a decent world with leaders who care and deserve to be respected. So thank you again and I’m looking forward to our next event!”

David Shapiro, who was recently appointed as CEO and Executive Director of JCW termed the event “emotional” and said: “I am truly thankful and proud to have been a part of such an extraordinary event. I watched family member embrace family member and friend embrace friend. The evening included emotional speeches by survivors and experts as well as spiritual and intellectual brilliance by Rabbi Shais Taub. It brought such a human connection and unity.”