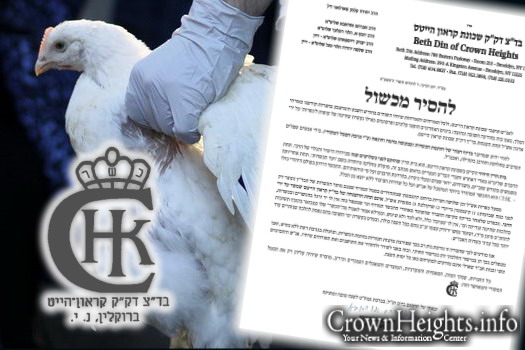 In a sharply-worded letter released this morning, Rabbi Avrohom Osdoba, senior member of the Crown Heights Beis Din, responds to flyers advertising a Kaporos that purports to be under the Hechsher of the Beis Din. “It is my duty to inform you all, that this is an absolutely fraudulent and misleading advertisement,” he writes.

The following is the text of the letter in its entirety:

To Anash of Crown Heights and all guests,

Flyers have been circulating about Kaporos being organized by Eshel as if they are being under the supervision of the CHK of the Beth Din of Crown Heights.

It is my duty to inform you all, that this is an absolutely fraudulent and misleading advertisement, by fraudsters and unscrupulous people, intended to sow strife and destruction in our community.

The Crown Heights Beth Din was initiated by the Rebbe close to 30 years ago, and we have been operating a Kashrus Hashgacha with G-d fearing professional Shochtim and Mashgichim under the supervision of the Rabbonim who were accepted and approved by the Rebbe.  This Hechsher of CHK is accepted and respected by Anash in the entire world and the rest of the Jewish community without exception, as the most trusted and most reliable in its high standards of Kashrus.

Let it be known that the Kaporos by Eshel as well as Kingston Bakery, Chocolatte and the Eshel restaurant, are fraudulently using the stolen symbol and logo of CHK, and they are not under the supervision of the Beth Din that was founded and approved by the Rebbe.  I must also add that after some investigation, it has become clear that those purporting to approve the Shchita and Kashrus of the above establishments have no knowledge, experience or training in Hilchos Shchita and laws of Kashrus in general; he has no Smicha or Shimush at all.  Therefore it is forbidden to eat from his Hechsher as paskened by the Chasam Sofer.  Therefore, any G-d fearing Jew should stay away from eating such food anytime, how much more so during the Aseres Yemei Teshuva when Halacha dictates that one must even more particular about the Kashrus of the foods that he eats.

Only establishments that have the legitimate Hashgocho and post this legal symbol and logo of CHK are reliable to be Kosher.

Wishing you all a Gmar Chasima Tova for a good and sweet year, Due to the sensitive nature of the subject, CrownHeights.info will not be approving any comments on this article.