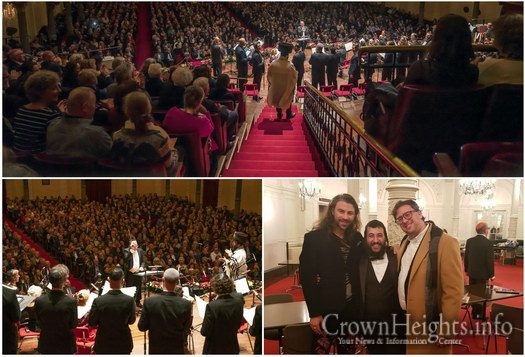 For the fourth time, a festive Chanukah concert took place at the Royal Concertgebouw in Amsterdam. For the first time a public Jewish concert in the Great Hall of the Concertgebouw since the Second World War.

On the fourth night of Chanukah, the large hall was completely sold-out. There wasn’t one available seat to be found. A Chanukia was placed on center stage- the great “Rintel Menorah” – which symbolically stood as a sign of solidarity, with society and the world. In the foyers the sufganiot were waiting on silver platters to be devoured.

Prior the Second World War, one or more public Jewish concerts could be experienced in the great hall. Tonight the pre-war tradition was restored, led by the phenomenal musical director Barry Mehler, and the star with a golden voice Israel Nachman, with conductor Joan Berkhemer and the Jewish Amsterdam Chamber Ensemble (JACE).

The hall filled with Dutch Jews promptly stood up at the beginning of the evening to say the Chanukah brachot – the prayers – over the menorah candles. The traditional songs were sung proudly and loudly with the hope that this will continue for many years to come. The song lyrics were written phonetically instead of in Hebrew and presented in a beautiful program book. This way everyone was able to follow along. Then the time came to enjoy a mosaic of liturgical, classical, Israeli and nostalgic songs. We were treated to old and new Jewish cultural heritage, including the songs Lecha Dodi, Avinu Shebashamayim and the breathtakingly beautiful song Vehi Sheamda. People applauded, sung and some even danced!