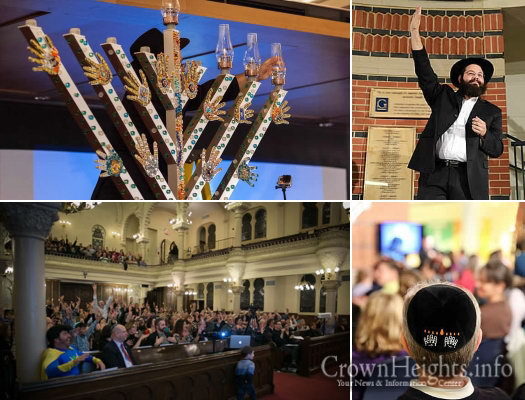 You’ve heard of Chanukah, but have you heard of #DeafChanukah?

If you ask me, #DeafChanukah is more than just eight nights a year. It is a movement—a movement made up of a huge and widespread population of Jewish people who also celebrate their Deaf identity.

It all began three years ago, in 2013, at Gallaudet University, when the first-ever public menorah-lighting took place on campus, together with the support of Rabbi Levi Shemtov, executive vice president of American Friends of Lubavitch (Chabad) in Washington, D.C.

Gallaudet is this amazing place where daily communication—and the language of choice for teaching and learning—is in American Sign Language. It is the only liberal-arts university of the Deaf in the world, with even a Deaf president at its helm.

Due to some red tape, we were only able to get permission to do the menorah-lighting just days before Chanukah began. And we could only do it outside, in the freezing-cold East Coast winter. I thought to myself: “Even if we don’t get so many people, we will still make history with this menorah.”

History was made in more ways than one. A crowd of more than 100 people showed up to see the first Chanukah flame glow proudly on campus atop a 9-foot-high menorah. The president of the university at the time, Dr. T. Alan Hurwitz, and the provost, Dr. Stephen F. Weiner, both of whom are Jewish, participated in the ceremony.

A few days later, a similar lighting was held on the campus of Rochester Institute of Technology, a university in Upstate New York with a large number of Deaf students. Dozens of students and faculty joined in the festivities.

That’s when I realized this wasn’t just a Chanukah celebration. This was #DeafChanukah. This was all about getting together as a Jewish Deaf communityand celebrating our identity.

This year, our organization—the Jewish Deaf Foundation—is gearing up for two major events in the two biggest Jewish Deaf communities in the United States: Washington, D.C.; and New York City. Drawing hundreds of attendees across all age groups, #DeafChanukah has become the biggest gathering of Jewish Deaf people throughout the year.

What is so popular about our events? Here are a few reasons:

3. Even before the events themselves, we make a big splash across social media, with thousands of views and likes on our Chanukah advertising. We also provide live streaming from our events. This is also the reason why we came up with the hashtag #DeafChanukah, so that our Deaf community can be united together with a common celebration, be it online or in person. We even started a campaign where Deaf people everywhere can post pictures of them celebrating Chanukah, along with the hashtag.

4. Perhaps my favorite reason of all: At our Chanukah celebrations, we use a 9-foot-high menorah—but not just any menorah. Designed by Jewish Deaf artist Ellen Mansfield from Frederick, Md., the De’VIA (Deaf View and Image Art) menorah dazzles everyone who takes a look at its beauty. We commissioned the design two years ago; ever since, it has been the centerpiece of our celebrations. It features an arrangement of hand shapes that together sign out “eight lights,” referring to the eight lights of the menorah.

My work has taken me to many different countries and hundreds of cities. Where there are Jews, there are deaf Jews. But there are not always Jewish Deaf communities where these deaf people live; in fact, most of them do not live near such a community.

And even when we talk about traditional Jewish Deaf communities today, there is much to be desired. In the old days (OK, before I was born), Deaf people would often meet up at Deaf clubs, where social and religious interactions happened on a frequent basis. Because deaf people could not use the telephone, such face-to-face meetings were so important. There were many positive benefits from such gatherings; for example, my parents, who are Deaf, first met each other at a national conference of deaf Jews.

With the advent of the Internet, FaceTime, text messages and more, those clubs folded. This meant that Jewish Deaf people simply met less and less to celebrate their Jewish identity. And then almost never.

Enter #DeafChanukah. As I mentioned above, it is by far the biggest Jewish event for the Deaf community of the year. Our biggest gathering—in Lower Manhattan at the Museum of Jewish Heritage—draws more than 300 people.

When we first organized this two years ago, my planning committee told me that we shouldn’t expect more than 100 people. How wrong we were! The enthusiasm we received (and continue to receive today) was beyond what we could dream of.

These Chanukah celebrations play a huge role in rejuvenating the Jewish Deaf community—not just locally, but nationally and even internationally through social media. And that is a miracle.

It is not about the lack of Deaf Jews. There are plenty out there.

It is simply about when and where we can celebrate our Judaism with our Deaf brothers and sisters. It is about people finding a home of their own in the Jewish world. It is about finding that fire—that passion to bring us all together.

Rabbi Yehoshua Soudakoff is executive director of the Jewish Deaf Foundation, an international organization serving the Jewish needs of deaf people everywhere, both online and in person. He has been involved in countless projects for deaf Jews, including Birthright trips to Israel, Jewish summer camps for children, online educational videos, holiday celebrations and more.