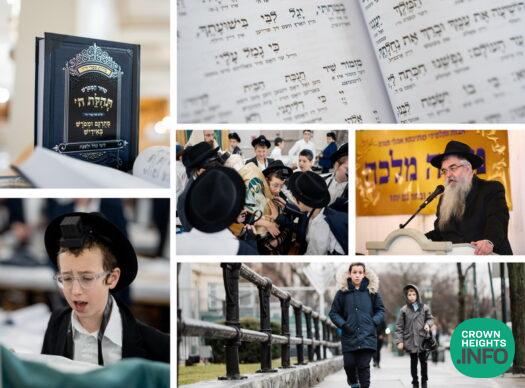 As this week is the Yahrzeit of Rabbi Zushe Wilhelm, a”h, a most beloved and devoted Menahel of the Oholei Torah Mesivta for 32 years, the Siddur he published, with a full Yiddish translation, has been made available in the Elementary, Mechina and Mesivta Divisions for the talmidim to use, as of Rosh Chodesh Shvat.

As Rabbi Wilhelm wrote in the forward to the Siddur, it was written in response to the request of many mashpi’im and mechanchim, in order to learn the meaning of the T’filla. Over the years, Rabbi Wilhelm published parts of this Siddur as various Kuntreisim, but just recently, the Wilhelm family published the Siddur in full, with the help of Machon Ohr Hachassidus. The first edition has completely sold out, and they are now working on the second print.

Special to the Schacharis Minyanim of the grades 6 &7, held both in Heichal Shmuel and the 3rd floor Shul / Katz Beis Medrash at the Eastern Parkway Campus, each talmid will have his own Siddur to daven and learn from.  Rabbi Shlomo Futerfas and Rabbi Dov Ber Blau, who run the Minyanim, will focus each week on a specific part of T’filla, using this Siddur as a base to explain and understand its meaning more thoroughly.

Rabbi Yehoshua Lustig, Menahel of 6th & 7th  grades, said, “I am eagerly looking forward to seeing the enhancement that these Siddurim will bring to the talmidim’s davening”.

This Shacharis Minyan is most special, since it gives the talmidim a yesod in davening as they go into their Bar Mitzvah year. The talmidim themselves lead the minyan, and they take turns in all its parts and details, as Chazzon, Gabbai, and Baal Koreh, and even with Hagba’ah and G’lilah.

Davening with kavona and understanding was very close to Reb Zushe’s heart, and over the years, he spoke and encouraged thousands of talmidim to daven properly with kavana. By using this Siddur that he wrote, it will surely be an aliyah for his neshama.

Please enjoy the picture gallery and videos from the inaugural day of using this Siddur in Oholei Torah.