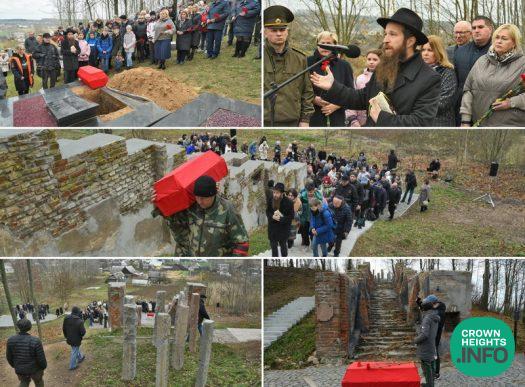 Recently discovered bones of Jewish children, murdered during the Nazi invasion to Belarus, were brought to rest in the historical Jewish shtetl of Shklov. The event was attended by dignitaries, government and military representatives, the Chief Rabbi of Mogilev, and members of the region’s Jewish community.

“During the Holocaust,” explains Rabbi Mendel Alperowitz, the Chief Rabbi of Mogilev and the surrounding Belarusian district, “many times, during their invasions and conquering, the Nazis brutally murdered Jews in killing pits. Later on, after the war ended, in many locations, the bodies were gathered and brought to rest in mass graves.”

“This also happened in Shklov, where the mass grave was renovated and reopened a few months ago. In recent years, the Belarusian government has been researching the German genocide on its land, and discovered that not all the bodies were detected in a nearby pit and that the remains of mainly Jewish children murdered during the holocaust are still in the pit.”

After the remains were gathered by official government experts, they were brought to rest in a special ceremony at the Shklov Jewish mass grave site. The ceremony included the reciting of the traditional prayers of Yizkor, Kadish, ‘Kel Male’ and emotional speeches by representatives.