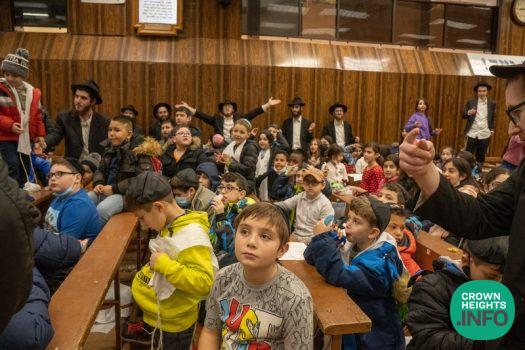 Question: I’m learning in a Chabad Kollel outside the USA. As this year is “Shnas Hakhel,” I volunteered to help with the monthly children’s rallies in our community. While I see the importance of these rallies, there is one thing that bothers me: the fact that the rallies take place in the men’s section of the community shul and that we bring girls (although seated separately) into the men’s section. Is this right according to our Chinuch hashkafa?

Answer: I would like to address your concern by sharing a story with you: One of first outreach activities of Chabad in Eretz Yisrael was the establishment of the “Reshet Oholei Yosef Yitzchak” which was a network of educational facilities and schools that catered to children from families that were traditional or not yet so observant.

The highlight of the year was (and still is) the annual gathering of all these children from throughout Eretz Yisroel on Yud-Shevat, in honor of the Rebbe Rayatz — whose name the institutions carry — and our Rebbe. The Rebbe would always ask about the details of the event and a full report of how it went.

In 5716 (1956), the event was scheduled to take place in the main shul of Kfar Chabad (of course not during the time of davening).

There were some idealistic young men that were living in Kfar Chabad at the time and they complained to the board of Kfar Chabad that it was inappropriate to bring non-religious girls into the men’s section of a shul. At the last minute, the board agreed and revoked the permission to use the main shul. This led the organizers to scramble and try to find a different venue and the event really did not work out well. The organizers felt that not only did the children — especially the girls — not gain what they could have gained, but it actually had a negative impression on them.

When the Rebbe inquired about the event, the organizers wrote an honest report. Upon receiving the report, the Rebbe sent two letters bemoaning the missed opportunity and the lack of leadership in this case: one to the board of Kfar Chabad and another to the rav of Kfar Chabad.

The following are the basic translation of these two letters:

(1) To the board of Kfar Chabad: After thanking all those that were involved in helping with the actual gathering, the Rebbe added the following: “On the other hand, I am shocked and I fully condemn this strange behavior of not allowing the girls of these educational institutions into the main shul, even though it is not the time of davening. This has no basis (in Halacha or Chassidus) and I am shocked that the board went along with this decision. It is certain that in the future, the board will contemplate the words of the Baal Shem Tov — that we heard from our Rebbe — that Hashem loves every Jew with a greater love than elderly parents that have given birth to their only son. I will also be writing to the rav of Kfar Chabad about this.” (Igros, Vol. 12 p. 325; #4145)

(2) To the rav of Kfar Chabad, Rabbi Schneur Zalman Gorelik: “When I asked the organizers of the event as to why there was not a proper venue planned for the event, they told me that they had wanted to do the event in the shul and that they were not given permission because of reasons associated with Yiras Shamayim! As the Rav of Kfar chabad, I ask that you follow up with these people and find out the following:

(a) Where is the source — in Halacha (nigleh) or Chassidus for such shocking behavior?

(b) Where did they get such “broad shoulders” to make this decision that prevented 100 girls from hearing inspirational words of Torah, as they are not rabbanim. They only have the right to bring up their position to the rav and follow his halachic ruling.

(d) There is a clear Gemara (Sukkah 51a) that women entered the courtyard of Beis Hamikdash…..

The Rebbe then adds the following: In the shul of my holy father-in-law the Rebbe (770), there were times that there were gatherings for girls. These events also took place in the lifetime of the Rebbe in this world. Thus I repeat: If these young men do not know the customs of Chassidim, they should ask (the rav) and not decide on their own. If they do know (that the Rebbe himself allows it in his own shul), how did they decide to act in the opposite manner? (Ibid, p. 326; #4146).