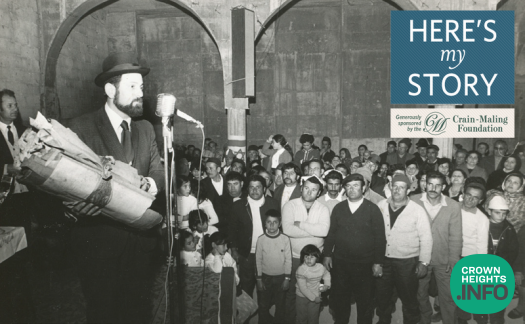 There are two kinds of moshavim – Israeli agricultural settlements. A small portion of them were founded before the State of Israel by non-observant Jews; the majority, however, were founded by religious immigrants from Arab countries or by Romanian and Hungarian Jews, after 1948

For many years, I have served as the rabbi of the Moshavim Movement, an organization once associated with the non-religious Mapai party that helped found many of these settlements in Israel. While the religious Zionist HaPoel HaMizrachi helped found perhaps 70 settlements, there are 270 Mapai moshavim. In the early days, the difference between these two groups was that the religious Zionist ones didn’t have enough money, but they did have synagogues and Torah scrolls. Meanwhile, the Mapai moshavim had more money, but not enough synagogues and not enough Torah scrolls.

So, in approximately 1960, I went to America, where there were many defunct synagogues, to collect some of their Torah scrolls for the moshavim. At the time, I was also involved with the Histadrut, Israel’s main labor union, as well as the editor of Machanayim, a magazine published by the IDF chaplaincy.

When my brother, Pinchas Peli, heard about my trip, he arranged for Rabbi Berel Levy to come pick me up from the airport. “You’re coming to my house for dinner,” Berel told me, “and then we are going out. I’ve arranged an audience for you with the Rebbe.”

“You are Rabbi Menachem Hacohen?” asked the Rebbe. “I thought there were a few of you: One of them is the editor, one of them the Histadrut rabbi, and another the author!”

The Rebbe invited me to take a seat. On his desk, I noticed that there were twenty or thirty issues of Machanayim, with many little notes sticking out of their pages.

As editor, I had turned Machanayim from a small weekly publication into a monthly one with hundreds of pages, full of pictures and articles about the holidays and other subjects. The Rebbe appreciated the size of the magazine and the prominent contributors who wrote for us, but advised me to be more careful about including any content that went against traditional Judaism. He also thought we could write more about religious military life, although I preferred articles about Jewish ideas rather than reporting on any particular people or activities in the army.

He asked many questions about the magazine: What did you mean when you wrote that? Where did you find this picture? Why did you publish that? There was an article about a certain person – without going into details – which the Rebbe suggested we ought not to have published at all.

“Did you read the article carefully?” the Rebbe asked.

“And you didn’t find anything wrong with it?”

“If that’s how you understand it, then let it be,” concluded the Rebbe, and he moved on.

After spending about an hour on the magazine, the Rebbe asked what my mission in America was, and I explained the state of our moshavim.

The Rebbe pressed a button on his desk, and in came his secretary, Rabbi Hodakov. “Send in Yudel,” the Rebbe told him, referring to another secretary.

When, after a few minutes, Rabbi Yehuda Krinsky came in, the Rebbe instructed him: “Give Menachem four Torah scrolls.”

“I hope these will be a good beginning,” the Rebbe told me. Those were the first four scrolls of about eighty that I brought back with me. I then asked the Rebbe whether I could publicize his donation.

Then the Rebbe had a request to make. “I have a friend in Eretz Yisrael, by the name of Kaddish Luz. Today, he lives in a kibbutz, Degania Bet, where I heard they just opened a synagogue. If you could give one of those scrolls to that shul, I would be very happy.”

“If the Rebbe is asking, of course I will do it,” I answered.

“No,” said the Rebbe. “This is now your decision. You might see that it will be more important to give them to other places.”

He then went on to ask all kinds of questions about the settlements: How is religious life there? What are the differences between the religious and non-religious moshavim?

The Rebbe was very happy to learn that even many of the secular moshavim had synagogues of their own, and even a shochet to provide them with kosher meat.

He also told me a very interesting thing about the moshavim. In the days of mass immigration to Israel, David Ben Gurion developed a policy that became known as mizug galuyot, or “blending of the exiles.” It meant that, as Jews came in from all over the world, they should not remain separate tribes – Moroccan Jews, Yemenite Jews, Tripolitanian Jews, and so on – but they should be brought together and sent to settle in the same moshavim. This way, the “melting pot” effect would make them into one people.

The Rebbe, however, said that it was not a good idea to force two different Jewish communities into the same small village. These groups have each left their respective diasporic communities and were brought to a new country with a new language; if they are made to merge with another community and share the same village synagogue, then they will be further disoriented by unfamiliar customs and religious practices. A moshav with Moroccan Jews should consist of Moroccan Jews, and one with Romanian Jews should be left that way.

I thought that he was one hundred percent right, and later on, this indeed became the policy. Giora Yoseftal, Israel’s first Minister of Housing, once asked me why I always asked about building new synagogues at the same time each year. The answer, I realized, was that congregations with Sefardim and Ashkanzim would split into two around the time of the High Holidays, after getting into fights about the details of the services. Some small moshavim ended with ten or fifteen synagogues! So, the government found that it was better for the communities to live among like-minded people who practiced the same traditions and adhered to the same culture.

We spoke for over three and a half hours. Every half hour or so Rabbi Hodakov would come back in, gesturing with his watch that it was time for me to go. But only at around 6:00 AM, did the Rebbe announce, “We have to go daven,” as he stood up.

We then went to the synagogue for the morning prayers.

Rabbi Menachem Hacohen is an Israeli author, scholar and former Knesset member who has been serving as the chief rabbi of the Moshavim Movement and the Hisdatrut for over sixty years. He was interviewed in January and March of 2010.