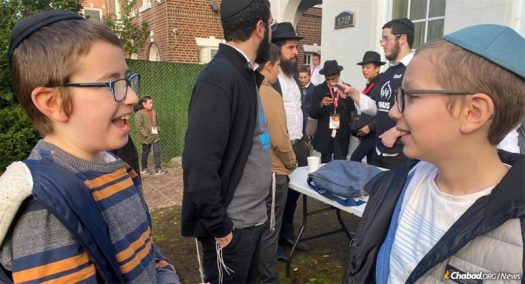 Living in a small Jewish community in Launceston, Tasmania, which has no Jewish day school, 12-year-old Sholom Gordon had a big challenge when his parents signed him up for an online school for Chabad emissary children with classmates in places like Cambodia and Taiwan.

Sholom’s parents, Rabbi Yochanan and Rochel Gordon, are directors of Chabad-Lubavitch of Tasmania and hail from Melbourne, Australia, and Manchester, England. When Sholom joined the school three years ago, he had to cross a significant language barrier: The school is run out of Israel, and classes are conducted in Hebrew. One of Sholom’s classmates, Yehuda Lent, whose family serve as emissaries to Nottingham, England, was particularly welcoming and helpful, translating unfamiliar Hebrew words, terms and phrases.

Yehuda’s bar mitzvah will be celebrated in England right after Chanukah, and Sholom was eager to attend. But the roundtrip airfare for him and one of his parents was prohibitive.

“Most boys my age can go to all of their classmates’ bar mitzvahs,” wrote Sholom in the description of the online fundraising campaign that he and his parents launched. “For me to attend my classmate’s bar mitzvah would mean a lot to me.”

Just one day into the campaign, his goal of nearly $8,000 AUD had been donated by more than 120 donors from around the world, many of whom wrote kind words of encouragement and congratulations.

In fact, the response was so overwhelming that he even has enough funds to arrange a stopover in Cyprus to attend the bar mitzvah of another boy along the way.

For one boy in Tasmania, it’s a dream come true.