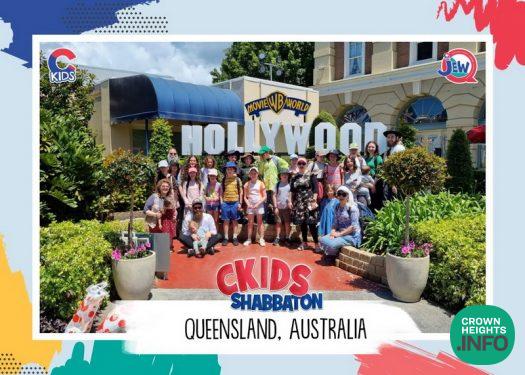 Elia Adler, a young Jewish girl living in Cairns, Australia, boarded a plane to Gold Coast, gathering with Jewish children her age for the first-ever CKids Shabbaton in Australia. The excitement swelled inside her, for she, along with many of the children who joined from all over Queensland, live in remote places that have small Jewish communities. Indeed, as Elia met Rabbi Ari and Mushkie Rubin of Chabad in Northern Queensland, she told him how happy she was to join the Shabbaton, explaining that, “back home, I’m the only Jewish girl in my school, so I’m so excited to meet some new Jewish friends from around the state” said Elia.

From all over Queensland, children converged on the Gold Coast to participate in the historic Shabbaton. The event was hosted by Rabbi and Rebbetzin Nir and Dina Gurevitch, as well as the Gold Coast Hebrew congregation. It was organized and accompanied by Mushkie Kantor and Moussia Cooper, Rabbi Ari and Mushkie Rubin, Rabbi Levi Jaffe of Chabad Brisbane and Rabbi Menachem and Shevi Aron from Chabad of RARA.

The weekend was a coordinated program of several Queensland Chabad Hebrew schools, Chabad of Northern Queensland, the Chai Kids in Brisbane, and the Gold Coast Hebrew Congregation Hebrew School, as a reward for children who participated in the international JewQ Jewish learning competition. The competition was inaugurated three years ago to encourage Jewish children to learn more about their heritage and bring Jews from across Australia together.

Rabbi Zalmy Loewenthal, director of CKids International, says this Shabbaton was “a major success in allowing Jewish children who aren’t exposed to a large Jewish community to come together and connect with Jewish kids like them.”

As Ben Miller, a ten year-old-boy from Brisbane, put it, “this was the best weekend of my life, and I had so much fun, making new friends, playing games, learning new Berachos, and learning more about what it means to be Jewish!”

The Shabbaton was filled with delicious food, wonderful company, and an array of exciting activities, including a Motzai Shabbat (Saturday evening) bowling trip.

On Sunday, the weekend culminated in a most exhilarating trip to the theme park Movieworld, which left all the children loading the bus back from the park, on a high.

As parents came to pick up their children, they were greeted with beaming faces and cheering of Jewish songs and chants; the kids ready to go back to their homes as ambassadors of light and Jewish pride. A mother of two children who participated in the Shabbaton said her family was “planning on moving up north to Sunshine Coast in the mountains where there are no Jewish people. I am so grateful that my kids could come to this Shabbaton and continue connecting to Jewish traditions through JewQ and all the wonderful programs CKids does.”

“It is Shabbatons like these that demonstrate what the purpose of CKids is all about,” Rabbi Mendy Kotlarsky, Executive Director of Merkos 302, “ensuring that the next generation has meaningful and personal Jewish experiences that stay with them for a lifetime.”

Rabbi Rubin of Chabad in Northern Queensland said that the uniqueness of the Shabbaton was “not just that the kids had a good time, but that they are leaving proud of being Jewish, with a whole community to support each other, even if they live far away.”