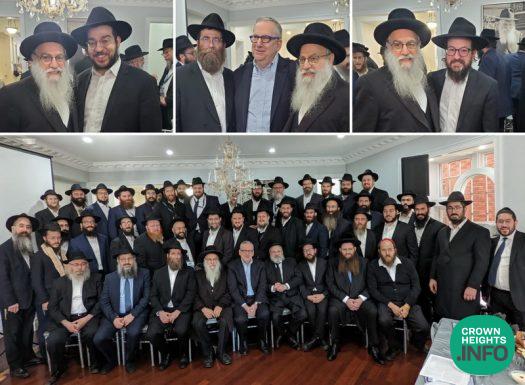 More than 100 Mohalim from across the world gathered this Sunday for an annual Kinus Mohalim, complete with a bris encouraged by the Rebbe, and a ceremony honoring the famed Mohel Rabbi Eliyahu Shain.

The Annual Kinus of Mohalim, organized by The International Bris Association directed by Rabbi Levi Heber, a Crown Heights Mohel, and Rabbi Yochanan Kline a Mohel in Miami, Florida, and director of Healing Hearts Bikur Cholim, took place this year at the Bris House on Crown Street in Crown Heights. It’s program coincides with the International Kinus Hashluchim with special emphasis on this year of Hakhel.

The event included a special ceremony honoring and recognizing Rabbi Eliyahu Shain’s lifetime accomplishments, whose more than 50-year career as a Mohel has set standards for all Mohalim.

Rabbi Shain’s high professional standard is something Mohalim aspire to, creating a legacy that will only build greater in the future.

Attending the event were many notable rabbinical and medical figures, including renowned Urologist Dr. Jeffrey Stock Chief Pediatric Urology at Mount Sinai, and Dr. Avi Rosenberg a physician-scientist and practicing renal pathologist at the Johns Hopkins University School of Medicine.

The Kinus Mohalim ended in a rare and joyous way, as a man waiting 20 years has finally entered into the Bris of Avraham.

The story of this French Jew begins at his birth when his father decided that he did not want his son to be circumcised. Despite a Shliach’s attempts, the father could not be dissuaded, and a letter was written to the Rebbe.

The Rebbe’s response via the Igros was clear, he should perform the bris “As soon as he possible,” and that time was this past Sunday.