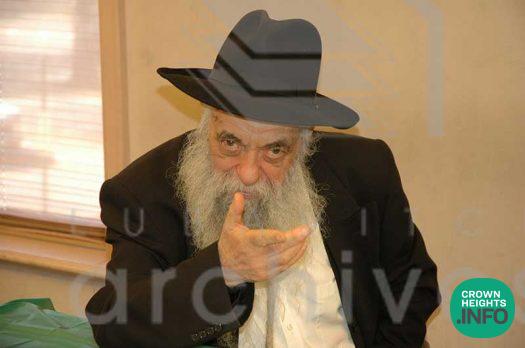 This past Tuesday was the yahrzeit of the Rebbe’s chozer, Reb Yoel Kahan and I spoke to one of his close talmidim about him. He told me that he became close to him after listening to the first class. Listening to what he told me, I said, this is a lesson that many can learn from so I will post it. Your feedback is always welcomed and appreciated.

I sat across the table from him and he taught a maamar. At the end of the class, he turned to me and asked me, the young student, “Did you understand [what was explained].”

That floored me. Here was the man who was responsible to record and transcribe the Rebbe’s teachings. He was the most senior master in the knowledge of Chassidus. Yet he was interested in knowing if a simple student as myself understood what was being taught. That was the first time that a teacher came over to me and asked me that question. It demonstrated that he wasn’t just interested in saying his thoughts, but wanted to make sure that it resonated with his students, otherwise the entire class was for naught.

Hearing that I thought to myself isn’t this a foundation that every educator has to hear? No one is questioning a teacher’s credentials. I would even say that no one is questioning the teachers’ motive for being in the classroom; obviously, it is to impart and give over their knowledge to the students and help them achieve.

The question is, do your students feel and hear that you are interested in them? Yes, to the teacher that is obvious, especially if they are in a school that doesn’t really pay them properly. However, if the student doesn’t feel and/or hear that so then something is missing. So being that this coming week is a convention for educators, I decided to write it

My friend had wonderful and qualified educators, but when Reb Yoel asked him, “Did you understand the class,” he felt a tremendous connection, saying this is a teacher who is interested in me. And that is what counts.

Recently I went to comfort a former student who lost his father. When I entered his mother thanked me for making the effort some ten years ago of coming to the shul they davened in to hear the boy read the Torah on his bar mitzvah. To them, that meant that he wasn’t just someone sitting in my classroom, but he is someone I think about and respect as an individual.

Once I am expressing my thoughts based on my thirty-two years in a classroom, I feel an obligation to dispel another notion. I heard from many colleagues that we are now facing challenges that were never dealt with before. A teacher is competing with the latest gadgets of technology for the students’ attention.

While there is some truth to this, I feel the premise is false. A hundred years ago in Russia, the educator was also battling something that was new and that his predecessors didn’t have to deal with. A new spirit of freedom was blowing throughout the country, a spirit of defiance of authority. A spirit of freedom from the Czar and freedom to live as one desires.

Those were turbulent times. Every student was aware of the different movements, whether it be communism or Zionism or the maskilim, Each movement had its ardent supporters and powerful orators. There was barely a family that wasn’t affected by this onslaught of NEW IDEAS etc.

Yet our predecessors combated that onslaught, and we have the ability to win once again. When the students sense that we are saying what we say with sincerity and that we really believe in it then we can and will succeed.

A simple point that I heard from numerous students. If a student sees that his teacher or someone in the administration takes out their phone in middle of davening, whatever they are told against phones is useless. But if the student sees that the phones are turned off before the minyan starts, they see that we really believe that a phone can be a distraction and while they might not appreciate and like our opinion, they respect us for saying I have to be careful just as you.

Another point my friend mentioned about Reb Yoel.

In the last years of his life, he had some doctor appointments and there was a student who helped out in the house. Knowing that the next morning Reb Yoel had an appointment, he asked him what time should I awaken you? Reb Yoel replied, “Two hours before we have to leave for the appointment.”

Seeing the student’s surprise he understood what his thoughts were, so Reb Yoel explained, normally when I wake up in the morning, I go to my office and work on a maamar or Sefer HaErchim and when I finish which can be in the afternoon I daven.

However, now that I am going to a doctor there is a clear Halachah that one should not take care of his own needs before davening, so I need to first daven Shacharis.

That is a second lesson every educator can learn from. When you sense a student has a question and you answer it without being asked, the student senses that you understands him and a trusted relationship is built.

Rabbi Avtzon is a veteran mechanech and the author of numerous books on the Rebbeim and their students. He can be contacted at avtzonbooks@gmail.com