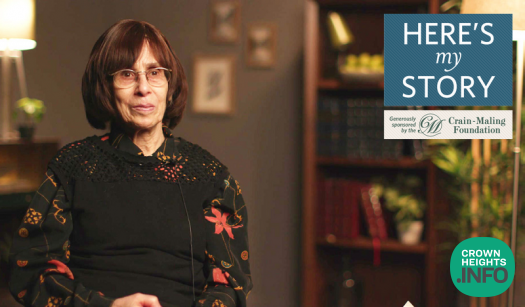 Here’s My Story: What Are You Teaching my Daughter?

I became interested in Lubavitch while attending the Bais Yaakov girls’ school in Brooklyn. At that point, there wasn’t yet a high school for the Lubavitcher girls to attend so they all went to Bais Yaakov, along with the girls from the Satmar and Modern Orthodox communities. There were students of all types.
The girl who sat next to me, and who later became my sister-in-law, was a Lubavitcher named Rivka Eichenbaum; it was because of her that I became involved in Lubavitch. I began to attend classes for women on Chasidus as well as farbrengens and other programs.

But there was a problem. My parents were not Chabad chasidim and they strongly believed that I should be following their way of practicing Judaism. They were very committed, observant Jews who were proud members of the Agudas Yisroel community. My grandfather Rabbi Pesachya Lamm was a prominent figure who had helped introduce glatt kosher meat to America, and although he had connections with Lubavitch — the Previous Rebbe had actually eaten his meat — my father didn’t appreciate that I was now studying Tanya and doing things differently. Seeing that I wasn’t following exactly in his ways hurt him.

I wasn’t willing to listen to him, but when he asked, I said that there was someone I would listen to: the Rebbe. With that, he went and arranged an audience for himself, my mother and me. I was seventeen at the time, and they were going to take me to the Rebbe to express their concerns.

But first, I sent a six-page letter to the Rebbe, explaining my numerous dilemmas: I was drawn to Lubavitch, but my parents disapproved. Meanwhile, my teachers at Bais Yaakov preached a sterner approach to Judaism that conflicted with the Lubavitch path. They were oriented towards the Mussar school of Jewish ethics, emphasizing seclusion and avoiding the evils of the world, both on a communal level as well as personally. By isolating yourself from other people, they said, you could focus on your own studies, and you’d be less likely to wind up gossiping. The Chabad chasidic approach, in contrast, was more positive and confident, emphasizing the good to be done with ourselves and others.

Which was the right path for me?

In his response, the Rebbe calmed me down. He explained that watching your health is a mitzvah, so there is no way that it could be at odds with other mitzvot of the Torah. He advised me to go back to my teachers in Bais Yaakov and ask them to help me manage my schedule.

However, the Rebbe disagreed with some of my teachers’ ideas, particularly with their emphasis on seclusion. It’s important to spend time among committed friends, he reasoned, because there is much to learn from them, and one can only hear an unbiased point of view from another person. He also reassured me that I didn’t need to compromise on my personal path in Judaism as long as I conducted myself in a peaceful and pleasant manner.

But now I was booked for an in-person audience together with my parents. My father arrived with a whole line of questions about my conduct: He wanted to know about my studies, and why I had to learn before praying in the morning. I had wanted to follow the custom of fasting on the day of one’s audience with the Rebbe so my father added excessive fasting to his list of complaints.

On that last point, the Rebbe was very adamant that fasting more than required by Jewish law was not the correct way. “Even I don’t fast more than is prescribed by Shulchan Aruch,” he remarked.

For most of my father’s questions, however, the Rebbe would turn to me and ask, “How come you do that?” After I answered, we would just continue on without the Rebbe adding anything.

It was quite uncomfortable to stand there with my father complaining about me so I asked the Rebbe if I could speak to him without my parents present. He agreed, but added that he also wanted to speak with my parents while I wasn’t in the room.

Of course, I was curious about what was said in my absence. My mother later told me that the Rebbe had suggested that my maternal grandfather, Rabbi Pesachya Lamm, should be enlisted to guide me in my religious development. My mother, of course, had no objection to that, but the Rebbe made a point of asking my father whether he approved as well. He came around to the idea after that audience, and later he even started to call himself a Lubavitcher as well.

After Bais Yaakov, I went on to seminary. Eventually I married my husband, Rabbi Pinye Korf, and became a full-fledged Lubavitcher. Before my marriage, I spent the summer as a counselor at a girls’ summer camp.

The camp was part of the Agudas Yisroel movement and had an orientation similar to my school. But I felt at home there, and tried to introduce various ideas which I had learned from Lubavitch to the girls.

On one occasion, I was asked by the camp’s rabbi to give a talk about a particular great Torah sage, and I decided to enhance the talk by including a story of the Baal Shem Tov, the founder of the chasidic movement. When this rabbi heard that the main thing that the girls remembered was the Baal Shem Tov, he became very upset. I was called to the camp office and told that I had to apologize — or leave camp. I didn’t feel sorry for what I had done, but I was sorry for hurting him, so we managed to patch things up.
A little while later, I made a trip to New York. My birthday was on the day before the fast of the 9th of Av, which was during camp, and I managed to have an audience with the Rebbe ahead of my birthday.

I had many questions for the Rebbe, and he had one for me: He asked whether I taught any classes at camp, and when I replied that I did, he said, “I want you to give a class on your birthday.”

The subject of the class was to be the 9th of Av. As it is the day of the Temple’s destruction, I was to speak about that. The Rebbe instructed me, however, to also speak about the future redemption from exile, when the Holy Temple will be rebuilt. And he wanted me to emphasize the Talmud’s statement that Mashiach, the redeemer himself, was born on that same date.

I was really uneasy with this idea, because although our Sages do refer to the 9th of Av as the birthday of Mashiach, normally the main focus is on mourning the tragedies and the negative themes of the day, especially in places like that summer camp. Still, I went back, gathered my courage, and told the rabbi that the Lubavitcher Rebbe wanted me to teach this class. He actually took it very well.

My mentor, Rabbi Uriel Zimmer, helped me prepare the class. It included a story about Rabbi Akiva who was walking with his peers and beheld the ruins of the Temple, but instead of crying, he laughed. “Just as the prophecy about the Temple’s destruction came to pass,” he explained, “we will also see the fulfillment of the prophecy of the redemption.”

Mrs. Chaya Korf resides in Crown Heights, New York, where she has taught in Bais Rivka for over forty years. She was interviewed in January of 2021.