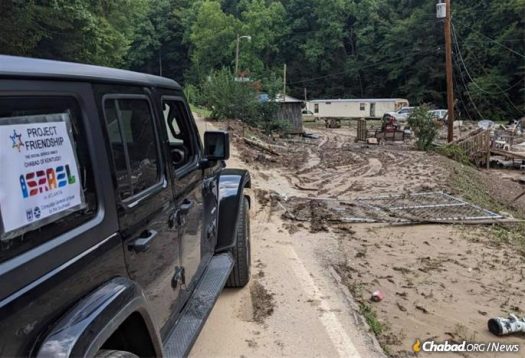 Chabad of Kentucky has delivered more than $150,000 worth of items, including bedding, gift cards, water and more to area shelters, and also handed out supplies to individuals in need they met along the way.

For the thousands of eastern Kentucky residents who fled their homes on a moment’s notice and lost everything they owned—and for the friends and families of the 37 people who have lost their lives so far—the worst flooding to hit the state in decades has been a surreal nightmare.

“We are still focused on meeting the immediate needs of providing food, water and shelter for thousands of our fellow Kentuckians who have been displaced by this catastrophic flood,” said Gov. Andy Beshear. “At the same time, we have started on the long road to eventual recovery.”

It is an ongoing natural disaster. Throughout the state, officials and volunteers rushed to provide food, shelter, staples and support for thousands.

Reflecting on their time spent visiting with victims of the devastation Monday morning, Rabbi Avrohom Litvin and his son, Rabbi Shlomo Litvin, stopped at a coffee shop in eastern Kentucky for a brief moment. They weren’t there for the coffee—ironically, surrounded by receding floodwaters, the shop had no access to fresh water with which to make the beverage even if they wanted some.

“The devastation is awful,” Rabbi Shlomo Litvin, director of Chabad of the Bluegrass, told Chabad.org during that brief break. “Seeing the homes destroyed and speaking to the families who have lost loved ones, it’s been a very heavy day.”

Late last week, more than seven inches of rain fell in a matter of hours, leading to flooding and mudslides, and causing homes to shift off their foundations, roofs to cave in, and leaving water everywhere.

Among the hardest-hit areas is Knott County, where 16 people, including four children, were killed. It is home to a little more than 14,000 people, according to the U.S. Census and the median income is $32,500 with nearly 28% of residents living below the poverty line.

“This is one of the poorest sections of America,” said Rabbi Avrohom Litvin, regional director of Chabad of Kentucky. “They are challenged on a daily basis. These are little towns in rural America, where people work in the mines and in difficult situations.”

And yet, the rabbi said, he was inspired by people he met. “I met a girl who lost everything, and I asked, ‘How are you?’ and she replied that she’s OK. I said, ‘How can you say you’re OK if you’ve lost everything?’ And she said, ‘because the people are OK, it’s only things.’

“It’s just such a positive attitude,” he said.

According to Rabbi Shlomo Litvin, some of the people they met had never seen a Jew before they arrived on the scene to lend a hand.

This is the third disaster that Chabad of Kentucky has been dealing with in recent months, including relief efforts after a devastating line of tornadoes in western Kentucky in December and a fire that destroyed the Chabad Center of Louisville on the last day of Passover in late April.

“From the end of December through January and February, we were very focused on western Kentucky,” said Rabbi Litvin. “From this past Friday and probably through the next month, we will be involved with helping people in eastern Kentucky. And between that, we had a fire and lost a Chabad House.

“I feel like a mourner on Chol Hamoed, the intermediate festival days [when one cannot mourn and must instead observe the holiday despite the sadness],” he said. “As we try to figure out where to rebuild and how to rebuild, and how to re-establish our Chabad House, we are still needed by others. We have to put our own mourning aside to help others in need.”

The Litvins brought more than $150,000 worth of items, including bedding, gift cards, water and more to area shelters, and also handed out supplies to individuals in need they met along the way. They even gave gifts to the volunteers at the shelters to thank them for stepping up at this time of need.

They also met with local elected officials, as well as officials from the Kentucky National Guard, from whom they got a briefing on the destruction.

The funds and materials were allocated through Chabad of Kentucky’s Project Friendship, a social-service program that provides clothing, shoes and household goods to people in need. They also received donations from the Consul General of Israel to the Southeastern United States.

“We had the privilege of offering our support to the people of Kentucky following the devastating effects of the tornadoes a few months ago and were greatly impressed with the strength of spirit, resilience, and willingness of our neighbors to come together to assist their fellow Kentuckians. As we are watching the current tragic effects of the flooding in Kentucky, we are glad to be able to join Chabad in an initiative to provide some assistance to those currently experiencing difficulty,” said Anat Sultan-Dadon, Israel’s consul general to the region.

Ironically, the governor and his wife were expected to visit Israel this week, a trip that has now been canceled amid the emergency.

“I cannot be overseas while the people of Eastern Kentucky are suffering and while the region will still be in a critical stage over the coming weeks,” said Beshear. “I promised the people yesterday that I would be there for them—today, tomorrow and in the coming weeks—and I am going to keep that promise.”

Chabad of Kentucky will also continue to be there to help. They have set up a fund for disaster relief to help the flood victims.

This article was republished with permission from chabad.org