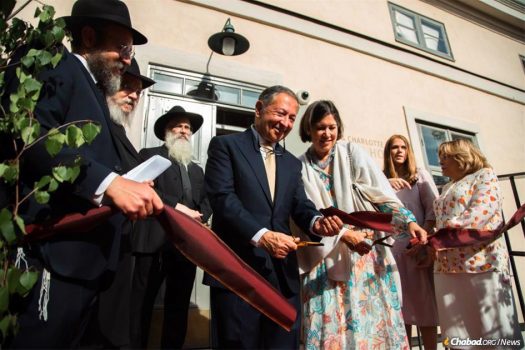 Celebrating a bright new chapter in Finland’s storied Jewish history, community residents and well-wishers from around Europe and the world gathered next to the Presidential Palace in Helsinki on June 22 for the inauguration of Finland’s newest Jewish community center, the Sami and Charlotte Rohr Chabad House. The historic building at 3 Mariankatu St. is the city’s second-oldest stone structure and underwent years of renovations and structural reinforcement after Chabad-Lubavitch of Finland acquired it in 2015.

Construction work early on unearthed archeological discoveries at the old Customs and Packing House built in 1765. A 300-year-old wooden fortress was uncovered beneath the surface, believed to have been built by a conquering fleet of 17,000 Russian soldiers who landed on what was then the shores of the Swedish Empire in 1713.

The layered history of the site mirrors Finland’s Jewish history, which began in the mid-19th century with Jewish soldiers known as Cantonists, settling in what would later become independent Finland. The Cantonists were Jewish boys who were forcibly conscripted into the Russian Empire’s army as young as 8 or 9. Kidnappers, or chappers, roamed the Jewish towns, plucking children off the streets and sending them off to military training, where they were summarily stripped of their Jewish identities, their tzitzit, and their tefillin.

These boys would be required to serve the Russian Empire for 25 years after turning 18. Those who served in Finland were permitted to stay there, though Jews were normally barred from settlement there.

Like many others, Chaim Nadbornik came to Finland with the Cantonists, circa 1858. He was born in Nadvorna, then Poland, now present-day Ukraine, circa 1840. After training in Novgorod and serving in the 90th Onega infantry regiment in Helsinki, he settled in Finland after his 25-year-long military service Chaim was sent a wife from the Pale of the Settlement, the part of the Russian Empire where Jews were allowed to live. These men—and the women who followed them—formed Finland’s first Jewish community.

“My family has been here for five generations,” his great-great-grandson Yaron Nadbornik, president of Finland’s Jewish community and vice president of the World Jewish Congress, tells Chabad.org. His background isn’t unique, he says. “About 60 percent of the Jewish community here are multi-generational, and about 40 percent are from other countries, like Israel, Russia, the U.S., Hungary, Norway, France and Argentina.”

The community is larger than many people imagine, he adds. “People think there’s two Jews in Helsinki and when they meet me they are meeting the other one,” laughs Nadbornik as he explains that Finland is home to about 2,000 Jews, most of whom live in the capital Helsinki, with a smaller community in Turku, 100 miles west.

Nadbornik appreciates the work that Chabad-Lubavitch of Finland has done over the almost two decades since Rabbi Benyomin and Ita Wolff arrived in 2003. “Chabad has added value to the community. They have been doing a wonderful job finding ‘lost Jews’; Rabbi Benyamin and Ita are two powerhouses of activity.”

In a community 150 years old, fresh ideas are always welcomed, Nadbornik says. “When Chabad came, they were good at pointing out that there were more things to be done. They provide a growth mindset that has impacted the entire community to be growth minded.”

And that growth has moved Chabad from space to space over the years. “We had six different locations,” Rabbi Wolff says. “This new center is in a central location in a very special building. We brought it back to life.”

Ita Wolff notes that the center will house a museum telling the story of Finland’s Jewish history—in which her family played a part. Her great-grandparents, Rabbi Mordechai and Bunia Schwei, were sent by the Sixth Rebbe—Rabbi Yosef Yitzchak Schneersohn, of righteous memory—to Turku, Finland, from Latvia, in 1928 on a mission to educate Jewish children. Their four children were born there, including their third, Aizik, Ita’s grandfather.

The Schwei family lived there for seven years, during which time Rabbi Mordechai Schwei served as a shochet (ritual slaughterer), a teacher, and an address for questions on Jewish law. In 1935, they moved to Estonia, where the rabbi assumed a similar position, before being forced to flee eastward with the outbreak of World War II.

“When we arrived in 2003, we were introduced to some of his students,” recalls Ita Wolff. “We are proud to continue the mission that our great-grandfather began almost 100 years ago.”