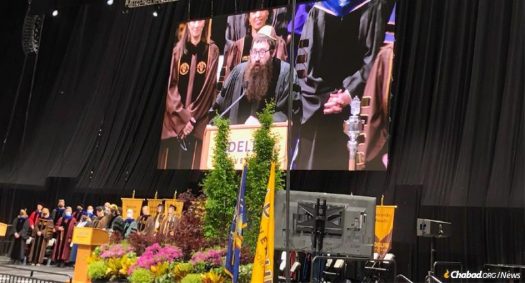 Judah Adler, 23, was glad to be able to hear from Rabbi Eli Backman one last time as a student at the University of Maryland. Backman, who has directed Chabad at the University of Maryland with his wife, Nechama, since 1995, kicked off the class of 2022’s graduation ceremony by standing before the school’s diverse student body to inspire them all and wish them well. “It was incredible,” says Adler. “It’s a nice feeling, of feeling represented as a Jewish student, and feeling the school cares for our community.”

Adler says he was impressed with the rabbi’s universal message. “Rabbi Backman and his family do such a good job of connecting and relating to everybody, of every background, whether they are students, faculty and administration,” he tells Chabad.org. “Everybody got something out of his commencement speech.”

Backman is among the many Chabad-Lubavitch emissaries asked by school administrators to address students at commencements and other university-wide events. College administrators have long recognized Chabad as a meaningful and vital part of the fabric of the Jewish college student experience. Chabad on Campus reaches students on more than 500 campuses around the world, with nearly 300 permanent centers, where husband-and-wife teams provide a home away from home for Jewish students and faculty members, offer community, support and advice as well as services, meals, Jewish learning opportunities and more.

As one sign of recognition of their work, these campus spiritual leaders have increasingly been tapped by administrators to inspire from the podium at official campus events. So as classes come to a close at colleges across the country this year, Chabad rabbis and their wives addressed their campus communities at ceremonies that marked the start of the next chapter of these students’ lives. They used the opportunity to inspire students, their families and friends to recognize the opportunities they’d been blessed with, and the universal message espoused by the Rebbe, Rabbi Menachem M. Schneerson, of righteous memory, charging each and every individual to better the world around them.

In his address, Backman urged students to not lose sight of the lessons they’ve learned, which have helped them become who they are today. “Stop each day, take a daily moment of silent reflection, a moment to understand who you are, your personal value, and your ability to impact the world,” he said. “A moment to realize how we are all in this world together, an opportunity to contemplate that there’s an eye that sees and an ear that hears everything we do.”

Afterwards, he was approached by students, parents and grandparents brimming with Jewish pride. “I was walking to shul the other morning and a car stopped, honked, rolled down the window and the driver said, ‘Rabbi, you spoke beautifully at my daughter’s graduation,’ ” he recalls. “I think this signals in a real way for the entire school family that Jewish life is part and parcel of the University of Maryland community, that we’re here, just like them, to celebrate, and are an integral part of the University of Maryland.”

Alex Kingsley, 22, says he appreciated Backman’s message and adds that he was glad the broader student body got a chance to hear from such a scholarly and well-read community leader. “I thought it was really important that there was a place for Jews at commencement,” he says. “Especially during a time when there’s somewhat of a rise in antisemitism … I think it’s important to provide an academic, learned and spiritual perspective of what Judaism is.”

The University of Maryland has had a chaplain offer a reflection at graduation for many years, says Denise McHugh, manager of the memorial chapel at UMD. “For students at different points in their lives, it’s just really important to look back and look ahead and with all of the excitement of graduation, it’s important to have a moment of reflection,” she says. “We think our chaplains at the commencement ceremonies help provide that, help provide those moments of reflection.

“Rabbi Backman does a beautiful job with that, as all of our chaplains do, realizing our community is so diverse.”

A Growing Presence at Campus Commencements

In Philadelphia, Moussia Goldstein, co-director of Chabad at Drexel University gave the invocation at Drexel University College of Nursing and Health Professions, and spoke about finding goodness in every person and every situation. “I think it’s important that people know and understand the strength of Jewish women, and what an integral role we play in society,” she says.

She has likewise received lots of positive feedback from students, who felt proud to see her on stage representing Jewish women, spreading G‑dliness, and tackling preconceived notions. “I’m passionate about showing our boys and girls that in Judaism, women are very strong and powerful and influential,” she says. “I had to take that opportunity.”

As a Jewish student who became more observant in college, Alexa Rubin, 22, says she appreciated the representation that came with seeing Goldstein on stage, as well as her message that people should use each interaction with another to also help even a third person and to elevate the world. “It was amazing to not just have a Jewish woman, but a [visibly observant] Jewish woman be the speaker,” she says. “Seeing Moussia speak was empowering. It made me feel seen and heard.”

Moussia Goldstein wasn’t the only Chabad emissary invited to speak at Drexel’s graduations.

Her husband and co-director, Rabbi Chaim Goldstein, has spoken at several graduations, including the university’s LeBow College of Business graduation this year. He brought along a dollar he got from the Rebbe, and explained how the Rebbe’s message was applicable to everyone. “He taught us how much goodness we have inside of us,” he says. “The definition of ambition is something which is hard to accomplish, but you just go and you do it. We all have so much goodness within ourselves that it’s incumbent upon us that we go out and share it with everyone around us.”

The world is waiting for each of them, he told the graduates, emphasizing the impact a good deed can have on the world. “You have so much inside yourself to share with others, you’ve been gifted and given so much to share,” he said in his address. “[Y]ou have to get up, you can’t just sleep in, the world has so much waiting for you to come in and do.”

On Long Island, Rabbi Yankel Lipsker of Chabad at Adelphi University in Garden City says he was glad to get a chance to say goodbye to graduating students, and to send them off into the world with a message of inspiration. “The true value of education is not just about accumulating skills and knowledge, it’s about making a mensch, making someone who’s a productive, moral member of society,” he said at the event. “And the success of that education is not just determined by how far you’ll go in your career, but about what kind life you’ll live, what kind of person you’ll be.”

He challenged students to lead moral lives they can be proud of, guided by knowing G‑d. “I wanted them to walk away with the message that as they’re just starting real life, they should look for the meaning and the divine in everything, and not just be overwhelmed by chaos but see beauty,” he says.

Adelphi graduate Asol Mani, 25, says it was a pleasure seeing the rabbi speak in front of thousands of students and parents. “He was connecting so much of the beauty of graduating and the beauty of becoming a working adult to the Jewish way of living,” she says.

She was the only Jewish woman in the group of student teachers she graduated with, she notes, and sitting among her friends, says she was glad they got to hear the rabbi’s message, Jewish in perspective but applicable for all. “I was very proud to have a representative of the Jewish community come and speak, especially with the rise we’ve been seeing in antisemitism and hate crimes against Jews,” she says. “The fact that a rabbi has an opportunity to speak in front of so many people and to share their words of wisdom during such a terrible time for Jews, I thought that was really, really powerful.”

Meanwhile, Adelphi graduate Moriah Rastegar, 23, says the rabbi’s message resonated with her family and peers alike. “I liked how Rabbi Lipskier spoke in terms everyone can understand, regardless of their religion,” says Rastegar. “I think it feels good to have spirituality in a special ceremony like graduation.”