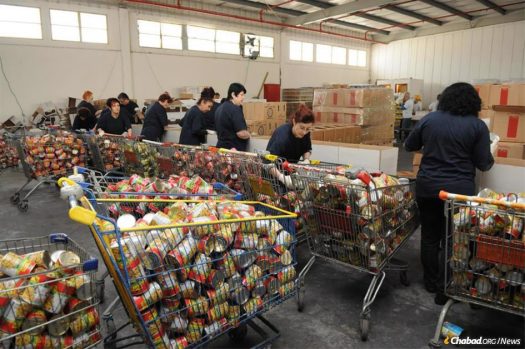 In an arrangement finalized this week, the Israeli government will partner with Colel Chabad and its Blavatnik Food Bank on a new $44 million program to help Israel’s most vulnerable families access healthier food and sustain themselves financially.

Working with local municipalities, Colel Chabad will oversee the creation and implementation of programming to identify 50,000 households around the country who are in need of support, which will include an extra 500 shekels (about $145) to spend on grocery items each month. In addition, the program aims to cut the cycle of poverty by giving families incentives to attend nutrition classes to make healthier, more cost-effective food choices, as well as courses that will empower them to increase their income and manage their expenses.

The longest-operating charity in the Holy Land, Colel Chabad was founded by the first Chabad-Lubavitch Rebbe—Rabbi Schneur Zalman of Liadi, known as the Alter Rebbe—in 1788. Given their experience and track record, Colel Chabad was a natural partner for the Israeli government in this new program, says Rabbi Sholom Duchman, the organization’s director. “We care, we have the know-how and the capability,” he tells Chabad.org.

Colel Chabad’s modern-day activities have been guided by the Rebbe—Rabbi Menachem M. Schneerson, of righteous memory, a descendant and the seventh generation successor of its founder, the Alter Rebbe—since 1948. Under his stewardship, it has become one of the Jewish world’s most recognized charities and its reach staggering. “The Rebbe taught us to love humanity and make an impact in the world,” Duchman says.

Duchman notes that one of the aid programs his team looked at in designing their new program was the United States’ WIC program, which was partly inspired by the Rebbe’s influence on New York Congresswoman Shirley Chisholm. They also took elements from the U.S.’s Supplemental Nutrition Assistance Program (SNAP) program.

The beneficiaries will include all segments of Israeli society—from homebound, elderly Holocauset survivors to mothers with newborns. Like the WIC program, new mothers will also be able to obtain formula for their babies.

Those who cannot shop on their own will receive deliveries from Colel Chabad’s vast network of volunteers—many of whom are already visiting the homebound as part of existing Colel Chabad initiatives.

“Ensuring basic food security is a fundamental value for developing welfare policy with the goal of reducing gaps in Israeli society,” said Labor, Social Affairs and Social Services Minister Meir Cohen. “By increasing the budget and resources of this national initiative, we will be able to advance responsible welfare policy that will encourage social accountability towards that goal of a society with greater equality within the greater population.”

It’s a huge responsibility, says Duchman, but an obligation Colel Chabad cannot shy away from: “We welcome this decision with a sense of both pride in our charitable achievements and a deep responsibility for the task that lies ahead.”