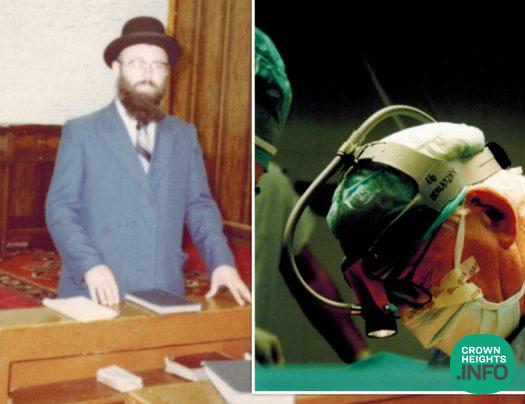 Here’s My Story: No Appointment Necessary

Rabbi Yaakov Shpitzer
In 1981, my niece, Tzippy – my brother’s daughter – was diagnosed with a severe form of leg cancer, malignant melanoma. The doctors at Rambam Hospital in Haifa were very pessimistic about her chances of recovery. One doctor gave her only one month to live. Obviously, her parents did not take the news very well, and they were at a complete loss as to what to do. She was a young girl – only nineteen years old – and an only child.

One Friday night, while my family and I were in middle of our Shabbat dinner, my neighbor, Rabbi Leibel Friedman, paid us a visit. He said, “I heard about your niece. You should know that the only person nowadays who can help her is the Lubavitcher Rebbe. My advice is that you go see him in the United States and do whatever he tells you to do.”

I was a little surprised to hear this coming from him, since he wasn’t a Lubavitcher chasid, but I listened to his advice and as soon as Shabbat ended I began making arrangements for the trip. I did not have a visa, and I knew that on Sundays the American consulate would be closed, so I contacted Rabbi Menachem Porush, who was a deputy minister in the Labor Ministry at that time. After hearing me out, he promised to assist in any way possible. I don’t know how he did it, but twenty-four hours later I was on my way to New York.

Immediately upon my arrival, I took a taxi to Crown Heights. I located one of the Rebbe’s secretaries, and after telling him the whole story, he promised to arrange an audience as soon as possible.

The next night, at around one in the morning, I entered the Rebbe’s study. Immediately, I experienced a feeling which is impossible to put it into words. Anyone who did not experience it will never understand.

The Rebbe looked at me and asked me what I needed. I attempted to hand him the X-rays and written diagnosis that I had brought with me, but he told me that he didn’t need them. “Just describe the problem, please,” he requested.

I obliged. When I mentioned that one of the doctors said that she only has one month to live, the Rebbe exclaimed, “What? She only has…?!” He couldn’t even finish the sentence.

He told me that there is nothing to worry about. I should return home and take Tzippy to see Professor Arye Durst, Director of Surgery at Hadassah Hospital in Jerusalem; I was to tell Professor Durst that we were coming on the Rebbe’s recommendation.

“But even the most optimistic doctor said that surgery won’t help,” I protested. “Were such a surgery successful, it would only prolong the suffering. The leg would eventually swell, and she’d never be able to use it again.”

The Rebbe repeated that we should tell Professor Durst that he had sent us. He added that the operation would be successful and the cancer eradicated, concluding, “May G-d grant her a long life with children and grandchildren.”

I could not accept that the Rebbe, without even seeing the medical documentation, could make such a pronouncement, and so I attempted again to explain the danger. The Rebbe said, “There is no need. Everything is fine; she is already healthy.”

When I walked out of the room, relief washed over me. I could not explain it, but I felt as if the problem had already been solved.

When I returned to Israel, I accompanied my brother and his daughter to Hadassah Hospital. When we arrived, the receptionist asked us if we had an appointment with Professor Durst. We did not. She informed us that the Professor could not see us without an appointment, and that we would have to leave. At this, my brother burst into tears, and I began arguing with her.

Suddenly, the door opened and Professor Durst walked in. When he inquired what the commotion was about, I said, “I was directed by the Lubavitcher Rebbe to bring this girl to you, so that you may operate on her and save her life.” Hearing that, Professor Durst agreed to see us.

Professor Aryeh Durst
As I sat in my office, I heard a tumult outside. I stepped out and I saw two gentlemen demanding to be seen without an appointment while my receptionist was trying to send them away. At first I was annoyed; they were causing a disturbance and were only making her job harder. But as soon as I heard one of them say that the Lubavitcher Rebbe had sent him, for some reason I decided that I should look into the matter.

Although I had never had any interaction with the Rebbe before, I figured that if such a revered figure in the Jewish world sent someone to me, I was obligated to look into the matter.

I examined the patient and read the opinions of her doctors, who uniformly agreed that nothing could be done. After a short investigation, I reached the same conclusion. The cancer cells that had formed in the skin were already spreading through the bloodstream. Had they been contained in the lymph nodes, it would have been relatively easy to remove the cancer. But once it has spread through the bloodstream, it begins to overtake the body like a wildfire. It goes to the liver, the abdomen, and the bones. At that point it is a lost cause, for even if the surgeon could remove the visible cancer cells, there is no telling how deeply it has invaded the body.

Unfortunately, this patient had already reached an advanced stage of cancer, and therefore her doctors in Haifa had advised against surgery. There was no point. I had no choice but to agree.

Nevertheless, despite what seemed to be a futile attempt to save her life, I decided to go ahead and operate. I reasoned that if the Rebbe had sent this patient to me he must have seen that she had some sort of hope and the least I could do was try. A few days later I performed the surgery, removing the cancerous lymph nodes and hoping for the best. Medically speaking, there was nothing more anyone could do.

To my amazement, she made an excellent recovery. I continued checking on her periodically and saw for myself that the cancer did not spread, and it did not return! In fact, she went on to lead a normal life – she married and raised a healthy family.

As a professional, I must admit that what saved her was not anything that I did. It could only have been the Rebbe’s blessing.

Rabbi Yaakov Shpitzer was the director of Sanzer-Klausenberger institutions in Israel before becoming chief gabbai of the Imrei Shefer community in Jerusalem, where he was interviewed in February of 2016.

Professor Aryeh Durst has headed the Department of Surgery at Hadassah Hospital for 20 years. He was interviewed in his home in Jerusalem in February of 2016.