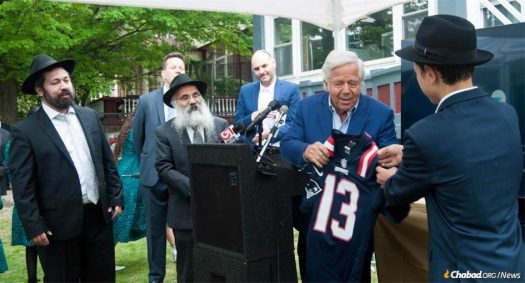 One year ago, Rabbi Shlomo Noginski, left, was stabbed eight times by a terrorist and in response, pledged to open a new yeshivah In New England to educate an initial cohort of eight rabbis. Last week, philanthropist Robert Kraft, second from right, inaugurated the new program, as Rabbi Dan Rodkin, director of Shaloh House, a Chabad-affiliated school and Jewish community center in the Boston area, and other donors looked on. (Credit: Olga Mariotti)

On May 19, the Jewish holiday of Lag BaOmer, the ribbon-cutting for a new rabbinical school was held in Brighton, Mass., with philanthropist Robert Kraft flanked by local rabbis, dignitaries and elected officials.

The school comes in response to the July 2021 antisemitic terror attack in the community. It was just last year that Chabad-Lubavitch Rabbi Shlomo Noginski was stabbed eight times by gun-wielding terrorist Khaled Awad, just outside the Shaloh House day school where Noginski works. During the attack, the rabbi heroically fought off Awad with his bare hands. In particular, Noginski, who fled antisemitism in the USSR for Israel, where he lived before moving to Boston, drew the attacker away from the steps of the school filled with children by running to a park across the street.

For years, the rabbi had a dream of establishing a rabbinical school in Boston. Mere days after surviving the gruesome attack, Noginski pledged to see his vision through to fruition. An opening cohort of eight rabbinical students would be educated in a new, purpose-built center—one student for each time the attacker tried to end Noginski’s life.

A fundraising campaign was launched by Rabbi Dan Rodkin, director of Shaloh House, a Chabad-affiliated school and Jewish community center in the Boston area. The effort saw people from around the world contribute more than $1 million in honor of the heroic rabbi, including prominent Boston-area Jewish philanthropist Robert Kraft, who personally contributed $250,000 towards the new campus.

The rabbinical school, which will be Boston’s only traditional, advanced rabbinic training program, will have a unique hands-on approach to rabbinic studies, explains Noginski. In addition to the standard, text-based core curriculum, the rabbinic candidates will engage in field work by leading services in the community, teaching Torah classes and officiating at Jewish life-cycle events such as bar mitzvahs, weddings and funerals.

“After the horrific terrorist stabbing attack, we made it clear we wouldn’t be scared off, and would continue growing and spreading light,” Rodkin told Chabad.org. “We shared our plan to establish a program to educate and certify the next generation of rabbis, and this new center is the realization of that goal as we open up a new chapter in Boston Jewish history.”