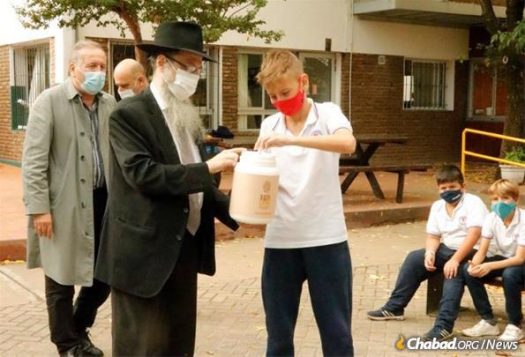 1.2 Million Children Bring Goodness and Kindness to Every Corner of Argentina

Following a rousing turnout last month that attracted more than 3,000 people in Buenos Aires, Argentina, to celebrate the 120th anniversary of the birth of the Rebbe—Rabbi Menachem M. Schneerson, of righteous memory—Chabad-Lubavitch of Argentina has won the support of more than half the nation’s governors to launch a massive program encouraging 1.2 million schoolchildren throughout Argentina to give charity and engage in acts of goodness and kindness.

“We want to reach 120 million maasim tovim (‘good deeds’),” said Rabbi Tzvi Grunblatt, the director of Chabad-Lubavitch of Argentina, who is spearheading the ambitious project, “and then 360 million more.”

It’s been more than 40 years since the Rebbe’s anniversary of birth—11th of Nissan on the Jewish calendar—was first declared “Education Day” by President Jimmy Carter and the United States Congress, a tradition that has been kept up by every U.S. president since. Beginning in the 1980s, dozens of other countries have followed suit. This year more than a dozen Argentinian governors signed declarations marking April 12, on which 11th of Nissan fell out this year, Education Day in Argentina, including the governor of Buenos Aires province, as well as the mayor of Buenos Aires. The proclamations called for a renewed focus on the essential meaning of education, including a focus on increasing the performance of acts of goodness and kindness, specifically tzedakah, or charity.

The proclamations, says Grunblatt, are only the beginning.

“Because principles have to be translated into action, we launched a campaign titled ‘Your Action Illuminates,’ ” Rabbi Grunblatt told Chabad.org. The project seeks to reach 1.2 million children, the vast majority of whom are not Jewish, who will each put 10 pesos (50 U.S. cents) in a large charity box (i.e., a pushka) at their school. Every school that signs up—hundreds already have—receives 10 pesos for each child to give to charity, and the school itself decides which local charity to donate the collected funds to. The project is being funded by a donor from the Jewish community.

“The objective is to reflect on our collective duty to strengthen true education, based on values, to become role models and translate this into concrete actions of love and kindness,” said Grunblatt.

Grunblatt has been working with political representatives and school officials around the country to have as many children included in this campaign as possible. Governors from 14 out of Argentina’s 23 provinces have signed on so far.

“We want this to transcend the schools,” said the rabbi. “The ideals of tzedakah, acts of goodness and kindness, and a general sense of morality, should echo on and permeate the psyche of everyone, children and adults. The effect this will have is too great to measure. And I hope that this will lead to more projects.”

The new project comes after 2,000 members of Buenos Aires’ Jewish community celebrated the Rebbe’s ongoing legacy at a gala event, and 1,000 children had their own special program on the 120th anniversary of the Rebbe’s birth.

Speakers at the gala event included Ariel Eichbaum, the president of the AMIA, the umbrella organization representing Argentina’s Jewish communities, who spoke of the Rebbe’s ongoing influence; Israeli orator Rabbi Shneur Ashkenazi; and Marc Stanley, the U.S. Ambassador to Argentina.

Ambassador Stanley spoke of “the legacy of the Rebbe, who had such a profound influence not only on the Jewish people, but on the entire world. … He was an inspiration. I believe that his work, including in the United States, helped pave the way to bring me to where I am today—the first Jewish-American United States ambassador to Argentina.”

The event took place days before Passover, and Ambassador Stanley told the crowd that he was looking forward to celebrating what very likely would be the first Passover Seder to be held in the U.S. Ambassador’s residence in Buenos Aires.

Speaking of the work of Chabad of Argentina, from its synagogues and schools to its immense non-sectarian humanitarian projects, the ambassador noted that “the Rebbe described tikkun olam [repairing the world] as the mission of every human being. Even small acts, the Rebbe said, can help move the world” towards good, and the ultimate repair.

Others present at the gala were Argentinian economist Matías Tombolini, the former vice president of the National Bank of Argentina; National Deputy Waldo Wolff; and Eduardo Elsztain, one of the most prominent businessmen in Latin America.

Elsztain has often spoken of the personal and professional advice he directly received from the Rebbe as a young 24-year-entrepreneur, and how that has influenced his life ever since.

Growth of Jewish Life in Argentina

When Rabbi Berel Baumgarten first arrived in BuenosAires as the first Chabad emissary in Argentina in 1955, the Chassidic rabbi stood out like a sore thumb. Life was difficult, especially financially; even years after establishing himself in Argentina, his organization struggled financially. At times, he had difficulties even putting food on his table. But with his genuine Chassidic joy and warmth, coupled with his breadth of Torah scholarship, he became a magnet for Argentine Jews. Slowly and surely, with his unmatched determination, Chabad in Argentina grew.

After Baumgarten’s passing in 1978, the Rebbe sent Buenos Aires-native Rabbi Tzvi Grunblatt and his wife, Shterna, to take the reins. The 1980s, when the country was ruled by a military junta, but Grunblatt persevered, and Chabad grew. Today, it caters to Israeli backpackers hiking the Andes Mountains from its center in Bariloche, the southernmost Chabad center in the world; has centers in distant cities, such as Bahia Blanca, Salta and Cordoba; and runs schools, synagogues and social-service organizations throughout Buenos Aires itself.

The nationwide Your Action Illuminates campaign represents another step in Chabad’s work throughout Argentine society, bringing the Rebbe’s universal message of goodness and kindness to every corner of the country. Today, children in cities such as Tucumán and Rosario and beyond are placing charity in a pushka, and learning, to quote the project’s website, that it is up to them “to become sources of light” and that their “actions illuminate the world with kindness, justice, truth and solidarity.”

Back in 1983, with little money in the bank but a strong desire to expand Chabad’s operations, Grunblatt called the Rebbe’s office in Brooklyn, N.Y., and requested the secretaries to ask the Rebbe what he should do: ‘We are very cramped in our building. Should we build?’ ”

“I didn’t give any other details,” recalled Grunblatt.