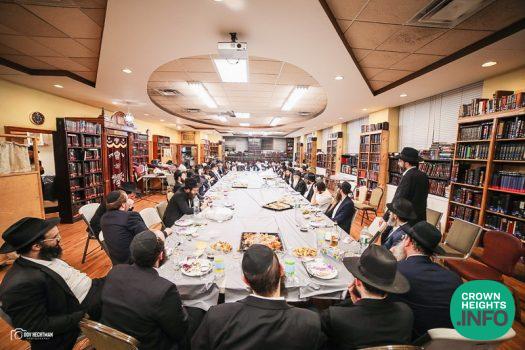 In honor of Pesach Sheini and Lag B’omer 100 mechanchim, both in-person and online, came together in camaraderie to reenergize their passion for chinuch with chassidishe life. The farbrengen, among regular farbrengens for mechanchim on special dates, was arranged by the Lubavitch chinuch organization Igud Hamelamdim.

Rabbi Glick spoke of how those involved in Chinuch tend to underrate themselves, which creates hardships. He reminded the mechanchim how Hashem’s own pride is being a Melamed (מלמד תורה לעמו ישראל), and recognizing that will help them overcome any obstacles!

In connection to Pesach Sheni, he explained, the lesson for Chinuch is obvious: There are countless examples of students who were written off as failures, and later in life went on to excel. He shared two stories of leading shluchim who as bochurim overstepped boundaries and should have been expelled. But due to the care of one person, the bochur was transformed and saved!

Rabbi Glick emphasized not settling for mediocrity in chinuch and channeling children’s energy in the right direction. As a mechanech for whom chinuch is his life, he said, everything he learns should be translated into chinuch.

Director of Igud Hamelamdim, Rabbi Avrohom Bluming, says that the feedback he gets from melamdim after the yomei dpagra farbrengens is unique.

“Though we host extensive courses and seminars throughout the year on the techniques of teaching, nothing compares to the impact of a farbrengen. That’s where the melamdim focus on their identity and mission as a chassidishe melamed. They sit together with fellow Lubavitcher melamdim, to hear and discuss what chassidishe chinuch is meant to be.”

To learn more about Igud Hamelamdim or to sponsor a program, visit IgudHamelamdim.org.