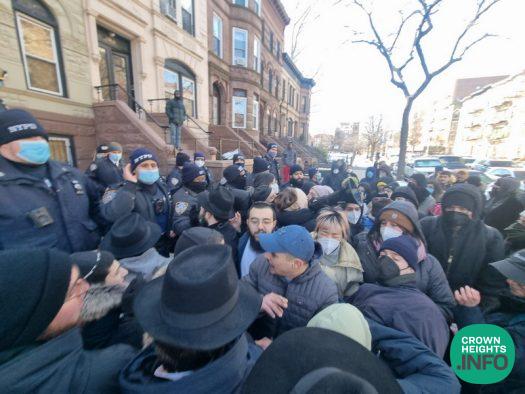 A bubbling feud in Crown Heights between an evicted tenant and a Jewish landlord spilled over into a clash between bochurim and a group of protesters Monday afternoon.

The clash took place in front of 964 Park Place, a home that is allegedly now housing bochurim who are attending a new Yeshiva for Kvutza bochurim learning in 770.

A group of vocal protesters, standing in what they believe is in solidarity with illegally evicted tenants, stood blocking the doorway of the dorm, leading to bochurim attempting to force their way through and ultimately forcing NYPD intervention. No one was injured and the situation deescalated.

The road to the incident began nearly ten years ago when the owner of the home, Ida Robinson, found herself unable to pay her required mortgage, according to court papers. She attempted to retain ownership of the home by having another person purchase the property from her for $800,000, then pay them them back.

Her attempt failed, and after being unable to pay the new “home owner”, her contract with them stated that she would lose all rights to the house, and would become a “tenant”.

Unwilling to accept this, Robinson declined to pay rent, instead bringing legal challenges as the home passed through multiple hands, ultimately being bought by a Lubavitcher.

During this time, the home remained occupied by Robinson, until March 2020 when a judge ordered her evicted. The Lubavitcher then allegedly leased the location to the Yeshiva.

Unwilling to accept the judge’s ruling, and claiming the entire situation was dead fraud, local anti-eviction activists took up the cause, and have been camped outside the home on and off for days.