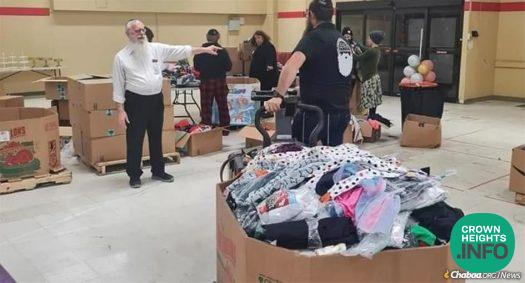 After deadly tornadoes tore through America’s heartland, Chabad emissaries are at the forefront of the herculean aid effort now underway in the hardest-hit communities.

Kentucky Governor Andy Beshear called it “one of the toughest nights in Kentucky history” as tornadoes that ripped across six states claimed the lives of at least 80 people, with many more missing and the death toll expected to rise.

“As Shabbat ended, we at Chabad of Kentucky heard of the tragedy in Mayfield (and numerous other smaller towns) in the devastating path of the tornado,” said Rabbi Avrohom Litvin, regional director of Chabad in Kentucky. “Our hearts ache for the victims and we are coordinating immediate relief.”

Rabbi Litvin received calls from Governor Beshear, U.S. Ambassador Kelly Craft, Senator Rand Paul, Congressman James Comer, and many others who thanked Chabad for their efforts and encouraged them to continue.

“We heard from officials what was needed, and we spent the next 15 hours loading a truck with what’s needed the most, including winter clothing, blankets, food and especially water,” said Rabbi Shlomo Litvin of Chabad of the Bluegrass. “The Israeli government, which was one of the first to offer aid to the state, has partnered with us to supply the water, and our thanks go also to Ambassador Kraft and the University of Kentucky Athletic Department for their partnership in this crucial effort.”

As an organization that is already active in aiding Kentucky’s most underserved, Chabad of Kentucky was uniquely equipped to bring immediate aid to those who suddenly were thrust into abject need. Since 2019, Project Friendship — Chabad of Kentucky’s social services arm — has focused on bringing clothing, shoes and other necessities to the needy, distributing, for example, 1,000 holiday gifts to families in need just a week ago.

Now, as news of the terrible storm filtered in and the magnitude of the statewide loss of life and property became clear, Project Friendship has been galvanized into action, with volunteers streaming to it’s warehouse to help sort, pack and load pallets of clothing, shoes, food and water that will be trucked to areas where the need is greatest, as entire counties and towns are without water, tens of thousands are without power, and so many homes simply gone, taking the worldly possessions of many of the tornado’s survivors with them.

“For the past six hours I have been on the phone with local and state officials to help coordinate relief for the many affected,” Chabad of Kentucky Program Director Rabbi Chaim Litvin wrote after the conclusion of the Shabbat. “Thank you to the Project Friendship team and all the volunteers that came out tonight to help prepare the pallets of clothing, shoes and food. We can get through this, we can get through this together.”

And the help they render will go beyond blankets and bottled water, as they’re offering counseling and simply a shoulder to cry on to many. “We are not just providing material needs,” said Rabbi Shmully Litvin, “but have offered spiritual aid to those in our community who have lost so much.”

Those wishing to contribute to the tornado relief efforts may visit chabadky.com/donate.