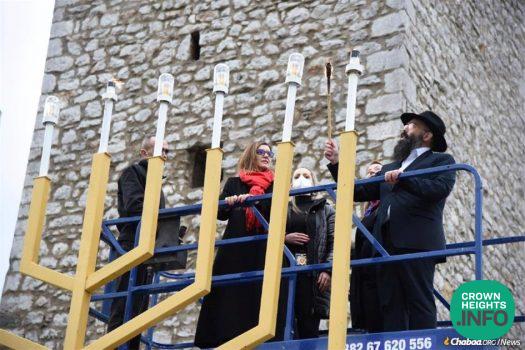 Rabbi Ari Edelkopf kindles Podgorica’s giant public menorah. Edelkopf was joined by the head of the E.U. Delegation to Montenegro Oana Cristina Popathe, center, and next to her, U.S. Ambassador to Montenegro, Judy Rising Reinke.

As the sun set over the Montenegrin capital of Podgorica on the first night of Chanukah, the country’s chief Rabbi Ari Edelkopf rose atop a cherry picker to recite the blessings and kindle the city’s giant public menorah. Edelkopf was joined by the U.S. Ambassador to Montenegro, Judy Rising Reinke, and Head of the E.U. Delegation to Montenegro Oana Cristina Popa, who was honored with lighting the shamash. The event was broadcast on national television.

“It brings awareness of our holidays,” Ivana Ilickovic, a Montenegro-born Jewish resident, told Chabad.org. “It’s good for people to see the light of Chanukah.”

“The menorah was lit this year at the base of the Clock Tower, which is a Montenegrin symbol of harmony,” explained Edelkopf. “This is a multi-ethnic country that respects all nationalities, and we feel blessed to be able to celebrate Chanukah together with people from all walks of life.”

Though the in-person portion of the event was moved online due to spiking Covid numbers in the country, the symbolism of Montenegro’s fourth annual public menorah-lighting was not lost on participants.

Four years ago, the Jews of Montenegro welcomed Edelkopf, their first permanent resident rabbi along with his wife, Chani, and their eight children. Serving as co-directors of Chabad-Lubavitch of Montenegro, the Edelkopfs have been critical to the expansion of Jewish life in the small Balkan country. Their work has provided a much-needed boost for Jewish residents, especially in the aftermath of the economic crisis that hit the tourism-dependent country in 2020. Since the beginning of the pandemic, Chabad of Montenegro has helped ensure—with the assistance of the European Jewish Association (EJA) and the Rabbinical Center of Europe (RCE), as well as private donors—that local Jewish families survive the economic downturn, providing supermarket vouchers, a food bank, assistance with buying medication and paying for surgery, and other desperately needed humanitarian aid.

In a country as young as Montenegro, which gained independence in 2006, almost everything the dedicated couple do is a first, including establishing kosher-slaughter production—producing poultry, beef and lamb, and supplying a kosher catering service that provides meals for the tens of thousands of Jewish tourists that visit the small nation tucked away in the heart of the Balkan mountains.

Jewish life has been given a brush and a canvas, and a painting as impressive as the natural surroundings of Montenegro is forming. The country that until recently had no regular Jewish prayer services, little kosher food and no Jewish education now has a thriving Jewish future. Bar and bat mitzvahs are celebrated, Jewish weddings are held, and the Jews of Montenegro have a Jewish address to call home. The Edelkopfs’ Shabbat meals attract quite a crowd, from locals to tourists, and are one of the most popular regular Jewish events.

Local Jews come from a diverse mix of backgrounds: Some are Ashkenazic with roots in Vojvodina, an autonomous province in northern Serbia, while others are from elsewhere in the former Yugoslavia. Others are Sephardic, with many hailing from Sarajevo, Bosnia, In addition to locals, these days Montenegro is home to American, Israeli and European Jewish expats. The majority of the local Jewish population stems from the former Soviet Union, and the multilingual rabbi—who previously served in Sochi, Russia, for 17 years—connects to them in their native tongue and is familiar with their background. With Edelkopf’s help and guidance, many local Jews have entered the covenant of Abraham with a brit milah, an opportunity denied to them under Communist rule, and gotten married with a chuppah, as prescribed by Jewish law.

“The rabbi and his wife unite us around Shabbat and holiday celebrations,” said Avi Belov, 41, a Russian-born Montenegrin. “Before they came, there was no Jewish life here.”

Belov described how the Edelkopfs have connected the diverse community, saying “he’s brought light, and has built a strong Jewish diaspora of locals and expats.” It’s the authentic Judaism that has been uniting the Jewish Montenegrins. “I am not religious,” added Belov, “but now I put on tefillin every day. The rabbi presented Judaism to me; he taught me.”

He also made it a point to note that he has seen no antisemitism in the country, and that the government supports the work of the Edelkopfs.

Ilickovic, 47, who was born and raised in Podgorica, recalled the Jewish state of affairs growing up. “There were Jewish families that connected with each other; some kept traditions while others didn’t. But there was no organized Jewish life.”

Illicovic later spent time in Belgrade, where she first encountered an organized community, wishing she’d had that growing up in Montenegro. When the Edelkopfs arrived in Montenegro, she was optimistic about the country’s Jewish future. “It was the first time we had a resident rabbi,” she said. “It was a great opportunity to learn more about Jewish life and see how holidays are celebrated.”

The Edelkopfs showed her that “Jewish life can be lived here in Montenegro.”

For Chanukah, Edelkopf is determined to spread the light of the holiday far and wide like never before. “Every day, we have a menorah-lighting in all Montenegrin coastal cities: Kotor, Herceg Novi, Tivat, Budva, Bar and Ulcinj,” he said, adding that Chabad sent Chanukah packages to hundreds of Jews around the country, which included a menorah and candles, do-it-yourself latke and doughnut kits, and chocolate Chanukah gelt for children and adults alike to enjoy.

The rabbi sent a letter to be placed at the Ohel—the resting place of the Rebbe, Rabbi Menachem M. Schneerson, of righteous memory—asking the Rebbe to intercede on High. “I said we need the rain to stop between 2:30 p.m. and 3:30 p.m.” Sure enough, at precisely 2:30 p.m. the rain stopped, the celebration began, and at 3:30 p.m., back it came again.

“It was a Chanukah miracle,” said the rabbi. “G‑d wants us to succeed.”