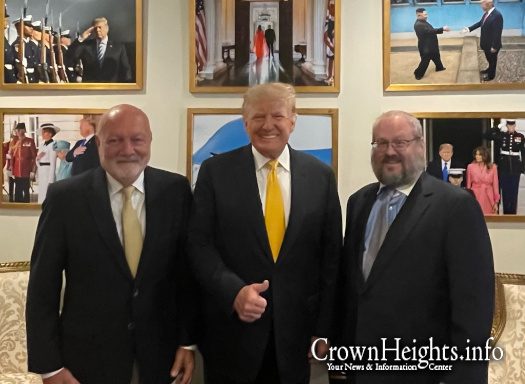 President Trump thanked Yehuda for his long-standing friendship and support and discussed world events and issues of Jewish concern.

They discussed the dangers of the Iran nuclear ambitions and the need for a strong America.

The President said he appreciated the Jewish community support for him and thanked the rabbis who attended the Faith in America event that was hosted by Kaploun with VP Pence attended by fifty Rabbis in the state of Florida.

Yehuda shared with the president that his great grandfather Shmaya Krinsky lived four doors down from Sheldon’s parents in Dorchester, Massachusetts and his great aunts were friends of Sheldon’s sisters.

President Trump expressed his deep admiration for Ed Russo for his long-standing environmental accomplishments and he wished them success is all their business ventures to help make America great.