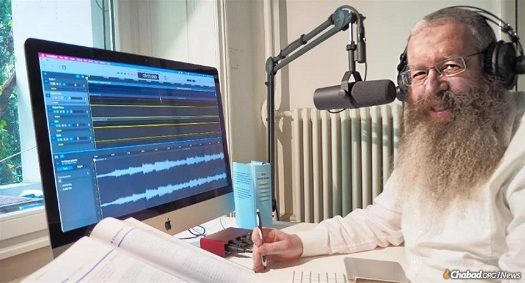 Chaim Rittri, a lawyer in Basel, Switzerland, has been recording entries from HaYom Yom (“HaJom Jom” in German) for a German-speaking audience from across Europe.

After a few soft bars of a guitar-strummed Chassidic melody, a calm, soothing voice comes through the headphones. “When the Alter Rebbe wished to bless Reb Yekusiel Liepler with wealth,” Chaim Rittri reads in German from HaYom Yom, “the latter said he did not want it; he did not want wealth to distract him from studying Chassidus and from his involvement with avodah.”

“People go about life backwards,” explains Rittri in his daily short podcast. “They first seek financial stability, then they think about how to bring meaning into their lives, to find the time to serve G‑d. Reb Yekusiel thought differently: He realized that man’s first priority must be his spiritual life, values before earning money—that can come later.”

For nine months, Rittri, 64, a lawyer in Basel, Switzerland, has been recording his podcast every day save for Shabbat (on Friday, he records two). Averaging about six minutes long, the podcast teaches an entry from HaYom Yom (“HaJom Jom” in German) to a German-speaking audience from across Europe. Parts of HaYom Yom are written in Yiddish, and Rittri’s German rendition sounds familiar at times.

Born and raised in Sweden, Rittri discovered Chassidus in his 30s when he and his wife moved to Switzerland. “I was already religious, but I wasn’t familiar with Chassidus.” Then they met Rabbi Tzvi Hirsh Zahler (who passed away last year at 95), a Chabad Chassid living in Basel, who was known as a great Torah scholar. “He began to learn Tanyawith us. We felt that Tanya addressed the questions we had that we’d never been able to answer.”

The podcast began with a young boy in Basel, Natan Wishedski, the son of the local Chabad emissaries. As part of a school project, Wishedski asked Rittri to share a positive resolution before the 10th of Shevat, an auspicious day on the Chabad calendar marking the passing of the Previous Rebbe—Rabbi Yosef Yitzchak Schneersohn, of righteous memory—and the day that his son-in-law, the Rebbe—Rabbi Menachem M. Schneerson, of righteous memory—began formally leading Chabad-Lubavitch one year later in 1951.

“I didn’t have anything to share,” Rittri tells Chabad.org. At the suggestion of a family member, Rittri began a WhatsApp broadcast, offering daily inspiration from HaYom Yom to dozens of fellow German speakers.

HaYom Yom (“Today is the day”) is an anthology of Chassidic aphorisms and customs, arranged according to the days of the year. Compiled by the Rebbe at the behest of his father-in-law in 1942, the book packs deep Chassidic thoughts into bite-sized doses of daily inspiration and has been translated into several languages, including Braille. “Small in format … but studded with pearls and diamonds of choicest quality … ,” the Rebbe’s father-in-law praised the book.

Rittri has long had an affinity for HaYom Yom; he was instrumental in introducing the contemporary design and typography of the new bilingual edition of HaYom Yom, published by Sichos in English. The WhatsApp broadcast proved popular, and when one subscriber from Nuremberg suggested that Rittri create a daily podcast, Rittri considered it.

“I didn’t know how to go about that,” he acknowledges, “so I read up on it.” Podcasts have an advantage over video classes, he feels. “It’s easier to produce; you don’t need lighting and video equipment and there’s no visual distractions.”

The “HaJom Jom” podcast, available on Apple Podcasts, Spotify and other popular platforms, is consistently among the top 10 Judaism podcasts in Germany, Switzerland and Austria, attracting thousands of listeners.

One steady listener, a Swiss woman living in Israel, wrote to Rittri how her daily ritual impacted her. “It is like a trickle of small drops that over time affects you,” she wrote, explaining that she didn’t immediately realize the effect it was having, but during her Yom Kippur prayers, it dawned on her. “I was focusing on my soul’s contact with G‑d; over time, that becomes internalised by listening to the podcast.”

“There is a lot of opportunity in the podcast world,” says Rittri, hopeful that others around the world will follow his lead and share Chassidic insights in podcast format.

When he’s not teaching Chassidus online, Rittri educates in print. In 2005, he founded a German-language publishing house for translating and distributing Chassidic literature called Books & Bagels, which also has an online store. It has published a Hebrew-German edition of the Tanya, The Rebbe’s Army and bestsellers by Chabad.org’s Rabbi Tzvi Freeman. Rittri says they’re currently working on a biography of the Rebbe, and, of course, his favorite: HaYom Yom.

This article was reprinted with permission from chabad.org.