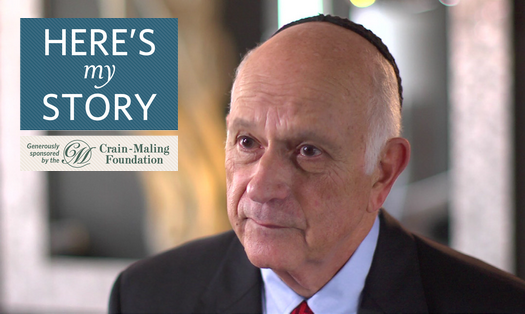 Here’s My Story: Rule of Engagement

On the evening after Yom Kippur of 1963, I asked the woman who would become my wife to marry me. Her name was Golda Katz, and she came from Chicago.

We were introduced earlier that year and after a few months I was ready to propose. I had just graduated from NYU Law School, taken the bar exam — at the time, I was waiting for the results — and begun a job as an attorney in Washington, D.C., with the U.S. Department of Justice.

Of course, we called Golda’s parents to tell them the good news. Her mother was very happy and congratulated us and then her father talked to me. He greeted me warmly but I noticed that he didn’t say Mazel Tov, and I figured there was more to this.

“I’m sure he’s going to want you to meet the Lubavitcher Rebbe before he can even consider us getting married,” Golda explained.

Golda had previously mentioned that her father, Yankel Katz, was a chasid and supporter of Lubavitch and that he had a very strong connection to the Rebbe. So, even though we thought we were engaged, my future father-in-law gave no acknowledgment of it. “Look,” he said to me, “you’re really going to have to meet with the Rebbe first.”

Having grown up in Crown Heights, Brooklyn, I had seen the Rebbe many times. I attended a local public high school, but in the afternoons I learned at Yeshiva Chaim Yosef which was located not far from 770. So I had prayed there a number of times and had seen the Rebbe, but I had never made any direct connection with him.

A week later, during the intermediate days of Sukkot, we — Golda, her mother, and I — were waiting on Eastern Parkway outside 770, while her father was inside with the Rebbe. It was already after midnight when he came out and told me that the Rebbe wanted to meet me.

Golda’s father had given me instructions beforehand. “Remain standing while you are in the Rebbe’s office and don’t shake his hand. That is not the custom.” But as I walked in, the Rebbe stood up, shook my hand and asked me to sit.

He greeted me with a gigantic smile on his face, which I felt was supposed to make me feel comfortable. But of course, I wasn’t. Being in the room with him was intimidating for me, especially since I realized this was an interview: Golda’s father had asked him to assess me and decide whether he thought I was appropriate for Golda. He looked at my father-in-law and motioned that he should leave.

Before I knew it, I was alone with the Rebbe. The first words he spoke to me were in English: “Do you speak Yiddish?”

The Rebbe wanted to know all about my life. I told him about my upbringing in Crown Heights, and mentioned that my mother had unfortunately been bedridden with multiple sclerosis while I was growing up.

He was very interested in the details of my mother’s illness, whether her speech or eyesight were affected, about other restrictions she experienced, as well as how she had initially been diagnosed. Multiple sclerosis is a disease that affects people in many different ways, and I believe that the Rebbe was trying to learn as much as he could about it since he  had been in contact with others who suffered from it.

“And what do you do for a living?” he queried.

When I replied that I was a lawyer at the Justice Department, he asked if I had ever met the attorney general.

Actually I had. After interviewing for the position at the Department of Justice, I received a telephone call from somebody claiming to be the attorney general, offering me a job. I was sure it was one of my friends — they were very good impersonators, and one of them did a good Kennedy accent.

“OK,” I had said, “Let’s not play this game. Who is this?” To which the voice on the phone replied, “Why don’t I give you my phone number in Washington and you can call me back?”

In any event, that was how I was offered a position at the Justice Department by Attorney General Robert Kennedy.

His brother, President John F. Kennedy, was still alive at the time.

I didn’t say all of this to the Rebbe, but I did recount a meeting I once had in Robert Kennedy’s office on a Friday afternoon. It was getting late and he wanted to continue, but I said, “I’m sorry but I’m a Sabbath observer and I really have to get home before the Sabbath begins.”

“That’s perfectly fine,” he reassured me. “Can we meet tomorrow?”

I told him no, because it would still be Shabbat.

Mr. Kennedy apologized, and then I suggested that we could meet anytime on Sunday.

I told the Rebbe this story and he smiled. Obviously, the Justice Department was very important, particularly since certain issues involving religion fall under its purview, and I think he was concerned about its attitude towards those issues. The fact that Attorney General Kennedy understood religious observance and was able to deal with it in a nice way seemed significant to the Rebbe.

Generally speaking, though, I was much more involved with an assistant attorney general, a man named John Douglas, and I told this to the Rebbe.

“Is his father the Senator from Illinois, Paul Douglas?” he clarified. I was astounded that he knew that, but he did.

I was even more surprised by the Rebbe’s knowledge of the political scene in Washington. The Rebbe was very much aware of what was happening there, and we spoke extensively about it. He wanted to know the specific type of work I was doing, whether I was able to go to court, my contacts with Robert Kennedy, and so on.

“Look,” I explained, “I really am just a new lawyer — I’m still waiting to hear whether I passed the bar!”

Now the Rebbe just smiled, but didn’t say anything. The next day, I have to say, the New York Times published a list of who had passed the New York Bar Exam and fortunately, I was on it.

While we spoke, there was nothing else that was relevant to the Rebbe other than talking to me. His thinking was foursquare on me, without any interruptions, which was amazing to me.

The Rebbe advised me to set a regular time for Torah learning.

“No matter how long it is,” he told me, “you should pick a time and make it fixed, so you know you are going to learn then.”

Finally, he spoke to me about Golda, and then he stood up and put out his hand. “S’iz a gutte shidduch — It’s a good match. Mazel Tov!”

To me it felt that the interview lasted just a few minutes but when I came out, my father-in-law was sweating bullets – he had no idea why it was taking so long.

He came running over, and then had a few more moments together with the Rebbe. I told my wife and her mother that the Rebbe had said Mazel Tov, so I guess we were okay to get married. Then, at last, my father-in-law came out again: “Mazel Tov!”

Mr. Marty Jacobs resides in Bal Harbour, Florida, where he practices law. He was interviewed in June of 2012.