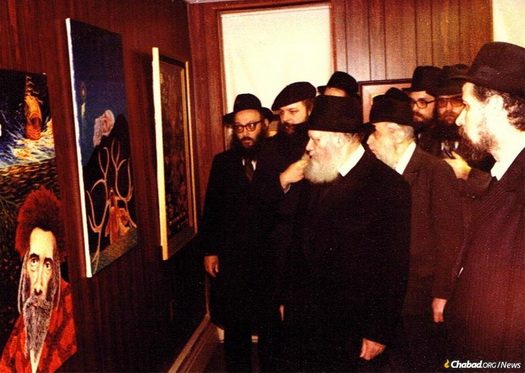 Baruch Nachshon, a pioneer of contemporary Chassidic art and a leading force behind the re-establishment of the ancient Jewish community of Hebron following the Six-Day War, who drew from the wellsprings of Jewish mystical teachings to create deeply evocative paintings that “emphasized the presence of the active Divine Will in creation,” passed away on Monday, Sept. 13 (7 Tishrei,) in Israel. He was 82.

Nachshon was supported, encouraged, and influenced in his life and work from a very young age by the Rebbe, Rabbi Menachem M. Schneerson, of righteous memory. During a 1979 visit to the Rebbe in New York, Nachshon asked the Rebbe whether he could bring a painting or two to his office. “Why only one or two?” Nachshon would recall the Rebbe responding, suggesting instead that he set up an exhibition of his work in Chabad-Lubavitch world headquarters at 770 Eastern Parkway in Brooklyn. “Set up the space,” the Rebbe told him, “and I’ll come to the opening.”

As a yeshivah student in Israel, he was advised by the Rebbe that “wherever I go, I was to bring my paints.” As an aspiring young artist, “the Rebbe gave me a scholarship and told me to find an art school to study in – but with strict conditions to elevate art in a kosher manner.”

The young painter took the advice to heart, and over the following decades, he would become an internationally acclaimed artist whose spiritually elevating work has attracted growing critical acclaim from the mainstream art world, and whose work is featured in galleries and museums around the world.

According to one critical appraisal posted by the Kings Gallery in Jerusalem, Nachshon’s art “covers a wide range of thematic material through equally diverse stylistic approaches, all of which are uniquely his own. He paints in order to define and to emphasize the presence of the active Divine Will in creation, and in order to inspire himself and others. Nachshon paints what he sees through the eyes of an inspired painter, communicating those visions to the world. Each of his paintings can be studied in the manner of a sacred text, providing numerous and vivid insights into the workings of creation and the promises held for the future.”

“Many of Nachshon’s paintings describe visions of the future, of the world after its final Redemption, of a world where all is peace and joy and where the revelation of divine beneficence is clear to all,” the appraisal continues. “Until that time, Nachshon’s paintings offer a glimpse of what could be, of what ought to be, and of what will be, when the work of humanity has reached its successful completion.”

Baruch Nachshon was born to religiously observant refugees from Europe in Haifa, Mandatory Palestine, in 1939. He began to paint in early childhood and became a self-taught student of art and artists throughout his early years.

As a teenager, he learned in Yeshivat Kerem b’ Yavneh, the first yeshivah in the modern State of Israel that combined traditional Talmud study with preparation for military service.

One day, he and some friends attended a Chassidic farbrengen in Kfar Chabad, where he became immediately and indelibly attracted to Chabad’s approach to Judaism.

“I was not the ideal candidate for the yeshivah’s systematic Talmudic study,” he told the Jerusalem Post in 2018. “It frustrated me. I had a rebellious spirit. But everything changed after I was invited to a Yud-Tes-Kislev celebration at Kfar Chabad, commemorating the liberation of Rabbi Schneur Zalman of Liadi, founder of Chabad Chassidism, from imprisonment in Russia.

“The niggun, the sweet melodies, were like nothing I’d heard before,’’ he recalled. “This led to me writing to the Lubavitcher Rebbe, who lived in Brooklyn, in hopes that he could answer my questions about art. I wanted to give life to different verses from the Torah and prophets, to themes of galut (exile) and geulah (redemption), but I was also feeling frustration, lacking technique and craft to accomplish my goals. The Rebbe wrote back a lengthy reply. In his letter, he answered my questions.”

Soon after, Nachshon enrolled in the Chabad yeshivah in Lod.

Following graduation, Nachshon enlisted in the Israel Defense Forces, and during his military service herded flocks for the IDF. He would say that it was an experience that imbued in him a love and appreciation for nature, which figures prominently in his work. Upon completing his military service, the young artist was torn between the temptation to travel to Paris, then the cultural center of the art world, and his deep love of the land of Israel.

Opting to stay in Israel, Nachshon studied under Shlomo Nerani, the artist Paul Cezanne’s only pupil, with whom he had enjoyed a deep friendship. Nachshon, whom Nerani viewed as his spiritual heir, was the only one of his students allowed to see his teacher at work.

After the Six-Day War in 1967, Nachshon and his wife, Sarah joined a group of idealistic activists determined to reestablish the ancient Jewish community inside newly-liberated Hebron. The Rebbe encouraged them and endowed them with many blessings for their efforts. These activists understood the supreme importance of establishing a Jewish presence in the oldest of Israel’s four holy cities, where a Jewish community had existed for thousands of years until the massacre of sixty-seven Jews by local Arabs in 1929.

They also understood that maintaining a Jewish community in Hebron would be the only way to guarantee continued Jewish access to the Cave of Machpelah, the burial site of our Matriarchs and Patriarchs and the second holiest site in Judaism, which until 1967 had been barred to Jews by the Muslim authorities for more than 700 years.

Three of the Nachshons’ sons were born in Hebron, and the couple repeatedly risked imprisonment by defying government orders and circumcising their newborn sons at the Cave of Machpelah, where Baruch had established an art gallery. When the mohel, the ritual circumciser, performed the first circumcision at the cave of Machpelah in more than 700 years, he wept as he said the blessing over “the covenant of Abraham our father,” in the burial place of the Patriarch himself.

In 1979, the quintessentially struggling young artist traveled to New York to exhibit his work and had an audience with the Rebbe, which he later reminisced about in an interview with JEM. The Rebbe suggested that he exhibit his work at Chabad-Lubavitch World Headquarters, which astonished the artist, who was even more moved when the Rebbe said he would view the exhibition.

As a devoted Chassid, and both a student and teacher of Jewish mysticism, Nachshon was well aware of the lofty nature of a tzaddik and a Rebbe. But the artist recalled that more than anything else that day, “what the Rebbe gave me was a sense of his graciousness,” and was impressed with the clarity of the Rebbe’s comments and observations about the specifics in his work.

At the end of the exhibit, the Rebbe inquired, “Did the people buy anything?” The artist thought that with all the Rebbe’s concerns, how remarkable it was that the Rebbe cared about his livelihood. When Nachshon responded that the prices for his paintings were too high for most people, the Rebbe smiled and suggested that he should sell his art worldwide in all forms, including prints and lithographs.

“What one sees with the eyes is more satisfying than what one eats,” the Rebbe told the artist. “When one sees something positive in their home it influences the entire home.”

Nachshon recalled years later that “I have heard of a number of homes where my art helped create a positive atmosphere. For that I am fortunate.”

In addition to his wife, Baruch Nachshon is survived by ten children, by more than 70 grandchildren, as well as great-grandchildren. He was predeceased by an infant son, Avraham Yedidya, who was laid to rest in the ancient Jewish cemetery in Hebron.

This article is reprinted with permission from chabad.org