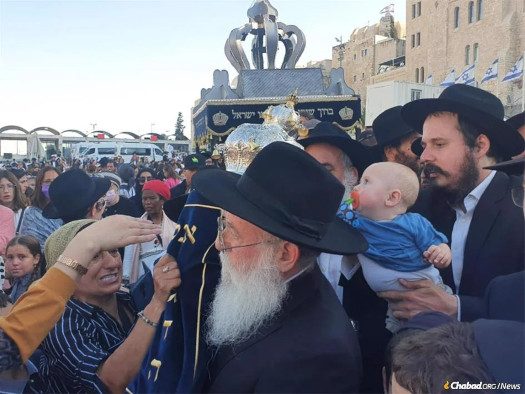 Thousands turned out at the Kotel in Jerusalem for the completion of the seventh Children's Sefer Torah. (Photo: Yaakov Ort/Chabad.org)

His brow furrowed and eyes blazing with fierce determination, 9-year-old Chaim Katz—an artful dodger in yarmulke, peyot and tzitzit—slipped under the security cordon surrounding the steadily moving chuppah in the Western Wall Plaza. He squeezed by a gaggle of backward-walking cameramen, and surrounded by thousands of men, women and children from around Israel and the world, rushed up to an elderly, white-bearded rabbi who was ecstatically dancing with the just-completed seventh Children’s Sefer Torah, reached up and gave the Torah a kiss.

A direct descendant of the kohanim, who 2,000 years earlier but only a few hundred meters away blessed the people from the steps of the Beit HaMikdash, the first-born Chaim beamed up at his parents while ignoring the envious glare of a younger sister. His mother, Malka Katz, explained that the family had made the three-and-a-half-hour trip by bus from Kiryat Sefer in northern Israel. She and her husband, Rabbi Avraham Katz, a Torah scholar who learns in a kollel, had purchased letters in the Torah for each of their children and wanted them to be there at its completion.

“It’s a moment the older ones will never forget,” she said.

Asked if he knew which of the letters that his parents purchased for him and his siblings in this Torah scroll was his, Chaim thought for a moment, and replied, “No, but every one of them is special and holy.”

While every letter and every word in every Torah scroll is indeed holy, and the completion of every new Torah is a special event—whether in the fledgling Jewish community of Reykjavik, Iceland, a trendy neighborhood in Chicago or the bustling Jewish metropolis of Tel Aviv—the completion of the seventh Children’s Sefer Torah in the holy city of Jerusalem has a particular significance.

In the spring of 1981, the Rebbe—Rabbi Menachem M. Schneerson, of righteous memory—spoke of the special power children have to make the world a better place. Quoting the Talmudic description of their speech as “breath free of sin,” the Rebbe explained that they can fuel a dramatic demonstration of unity that could change the planet.

A Letter for Every Jewish Child

To that end, the Rebbe urged that every Jewish child possess a letter in a Torah scroll written specifically for them. All it would cost is the symbolic amount of $1 (or its equivalent in local currency), ideally coming from the child’s own funds or sponsored by parents and family members. Each letter would link Jewish children the world over to the foundation of their heritage and to each other.

The Rebbe also asked that the Torah scroll be written in Israel, “the land where the Eyes of the L‑rd your G‑d are upon it at all times, from the beginning of the year until the end of the year.” The Rebbe specified the Old City of Jerusalem as the location for the writing of the Torah scroll. This is because Jerusalem also represents “the concept of unity,” as it was never divided among the tribes and was the focal point of the people in Israel. The Rebbe further requested that the Torah scroll be written in the Tzemach Tzedek synagogue—the only synagogue in the Old City whose walls and roof remained intact throughout the Jordanian occupation between 1948 and 1967.

Every Torah scroll contains 304,805 letters; writing a complete one usually takes a whole year. But the campaign—launched with the backing of rabbinical leaders, such as Rabbi Israel Abuchatzera and Rabbi Moshe Feinstein in Israel and New York, respectively—sparked such enthusiasm that the first children’s Torah scroll was successfully completed in just three-and-a-half months.

That first scroll was finalized in 5741 (1981), on the 20th day of the Hebrew month of Av, the anniversary of the passing of the Rebbe’s father, Rabbi Levi Yitzchak Schneerson, of righteous memory.

Exactly 40 years later, the seventh Torah scroll was finished in the same place, and thousands gathered at the Western Wall (Kotel) in Jerusalem to celebrate its completion. Honored guests included Jerusalem Chief Rabbi Shlomo Moshe Amar and leading Chabad-Lubavitch rabbis from throughout Israel.

The writing of the eighth Torah scroll has already begun. Letters can be purchased online or via mail (still for just a dollar). Every child receives a colorful certificate with his or her Hebrew name on it and the portion of the Torah where his or her letter can be found.

Is Chaim Katz looking forward to celebrating the completion of the eighth Children’s Sefer Torah?

B’emet! (“truly”), said Chaim, pointing to the Kotel. “In the Beit HaMikdash, with Moshiach!”