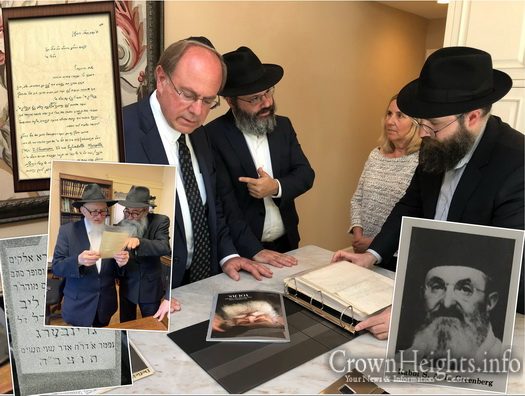 Jewish people worldwide have just marked the eightieth anniversary of 28 Sivan with great fanfare, celebrating the miraculous arrival of the Rebbe and Rebbetzin on the shores of the United States, eighty years ago.

As the focus shifted to marking Gimmel Tammuz, and more than fifty thousand people visited the Rebbe’s just on the day of Gimmel Tammuz alone, a miraculous find was being investigated by a few people, which would produce a valuable historical Chasidic treasure.

The owner of a Jewish funeral home in Connecticut occasionally receives collections of books and documents from deceased Jews for the purpose of burial or geniza. In recent days, a shoe-box of papers was destined for a similar fate, but leafing through the documents, one specific letter caught his eye. He didn’t recognize the handwriting, but something inside him pushed him to photograph the letter and uploaded it, on Gimmel Tammuz, to a social media group looking for anyone with more information.

Within minutes, several Lubavitcher Chasidim identified it as the Rebbe’s handwriting and contacted the individual and requested that he remove the post from the internet and arranged for experts in the field to review the contents of the box for further investigation.

Representatives of the Central Library of Agudas Chabad and the Kehot Publication Society, visited the home of the funeral director and discovered that the letter was part of a collection of great historic value, and graciously received it from the funeral director. Rushing back to Crown Heights, Brooklyn, they reported the successful find to the Rebbe’s secretary and executor of his will, Rabbi Yehuda Krinsky, who in the past had the merit of rescuing various collections of this nature for the Rebbe and the library.

On Thursday, 7 Tammuz, the unique collection made its way home to the Chabad Central Library of Agudas Chasidei Chabad, and was graciously received by the library’s director, Rabbi Shalom DovBer Levine. Thus the collection rejoined its family — the large collection of documents and letters housed in the Library’s Archive Center.

Highlighting the discovered collection is a letter written by the Rebbe mere weeks after his arrival in the United States, in 1941. It is the first known letter by the Rebbe of that period.

The team of editors working on the Rebbe’s Igros Kodesh immediately went to work, analyzing and annotating the letter. Just in time for Yud-Beis Tammuz, the Rebbe’s eighty-year old, freshly rescued letter is being released by Kehot and is available here: link – http://www.lahak.org/5166788

Interestingly, another fascinating letter, dated 8 Tammuz 5702 (1942), was discovered in recent weeks as well. This letter was written to Reb Asher Segal, who had been among the Jewish refugees in Lisbon, Portugal, along with the Rebbe and Rebbetzin — as they awaited passage across the Atlantic Ocean to safety.

This letter arrived to the library thanks to efforts by Rabbi Yaakov Yosef Raskin, Shliach to Jamaica, where Reb Asher Segal lived.

To hear more about this amazing discovery, we visited the office of Rabbi Chaim Shaul Bruk, Director of Lahak Hanachos, and one of the editors of the Igros series, who recounted the rescue effort and explained the significance of the discovery.

Why are you all so excited this week?

“Firstly, we have discovered a new letter of the Rebbe that had not been previously known. Secondly, letters in the Rebbe’s personal handwriting are extremely rare, and t thirdly, and most importantly, this is the only letter from the year 5701, the year the Rebbe and Rebbetzin arrived in the United States — exactly eighty years ago (there is a translation of a telegram sent from Nice, but not a single letter).”

What exactly does this letter contain?

“In general, we don’t have any letters from before 28 Sivan 5701. All the letters published in the Igros from those years were those preserved in the Rebbe’s Reshimos. Even after the Rebbe arrived in America and was appointed as the head of Merkos, Machne and Kehos, there are no extant letters from that year. It’s an amazing hashgacha pratis that it arrived to us now, eighty years later.

“Furthermore, this letter contains a first-hand account of the Rebbe and Rebbetzin’s life — and specifically about the difficult years of World War II. It was written on 19 Tammuz 1941, less than a month after arriving safely in America.

“Over the last twenty years, endless money and efforts have been invested to document the Rebbe’s life. Expert researchers and historians have worked tirelessly to collect every document and every piece of paper that sheds light on the Rebbe’s early life — as recently released in Jem’s ‘Early Years’ book, by Rabbis Boruch Oberlander and Elkana Shmotkin.

“However, the Rebbe’s years under Nazi occupation were mostly documented by word-of-mouth from people who spent time with the Rebbe and Rebbetzin or met them in one place or another. The only time we merited to hear a first-person account was upon the publishing of Igros Kodesh in 1983, when Rabbi Sholom Ber Levin of the Rebbe’s library was given the opportunity to visit the Rebbetzin and hear her account of the events.

“But here, in this letter, the Rebbe clearly outlines the order of their travels from city to city and country to country. Besides for the tremendous historical value, this is an amazing revelation for Chasidim who are thirsty for every piece of information they can obtain about the Rebbe.”

How do you explain the miracle of this letter’s discovery moments before being buried forever?

“Baruch Hashem, I have had the merit to spend close to forty years finding and obtaining the Rebbes Igros, reshimos, maanos, sichos and hanachos of the Rebbe to bring them to print. I feel that the reward is in the mitzvah itself — sechar mitzvah mitzvah. In the merit of the publication of the Rebbeim’s Torah, and the Rebbe’s Torah in particular, we were sent this letter in a miraculous way — even twenty-seven years after Gimmel Tammuz.

“We need to put an end to the shameful sale of the Rebbe’s possessions to the highest bidder. Unfortunately, some of our own Anash are involved in these sales; for a few dollars, they are willing to part with precious possessions of the Rebbe and Rebbetzin, and previous Rebbeim as well. We need to say it as it is: It’s a crime, and it causes untold pain and agmas nefesh to the Rebbe.

“I truly hope that these sales will cease and that Chabad websites and institutions will not cooperate with them at all.”

Tell us more about the letter?

The Rebbe wrote the newly discovered letter to Reb Shimon Aryeh Leib Greenberg, originally of Warsaw, who had been a student at Tomchei Temimim in Lubavitch and afterwards in Schedrin. He was a well-known baal menagen and Chazzan. In 5692 (1932), he was sent by the Frierdiker Rebbe to Paris where he served in a number of capacities: a shadar, shochet, sofer, and mashpia. In 5699 (1939) he immigrated, alone, to the United States, and eventually settled in Hartford, Connecticut, in 5707 (1947), where he served the Jewish community until his passing on 1 Adar II 5719(1959). He is buried near the Ohel.

The letter was discovered by Mr. Levi Yonasan Holtz, director of the Chevra Kadisha in Hartford, whose father, Chaim Leib Holtz, was the director before him. After coming across the letter, he was visited by Rabbis Avraham and Yirmi Berkowitz, who represented the library of Agudas Chasidei Chabad and Kehos, who explained the significance of the letter and the great merit he would have to return a possession of the Rebbe to the Library of Agudas Chabad, as would be the Rebbe’s wishes.

At first, he doubted whether that would be the best course of action. In the course of his deliberation, he took out the book of the Chevra Kadisha which lists all the deceased community members along with their dates of passing and places of burial. Suddenly, a booklet fell out from between its pages: a booklet published some ten years ago in honor of Gimmel Tammuz, with the Rebbe’s picture gracing its front cover.

Everyone in the room gasped. The message was clear. Moreover: The booklet featured an article about two bochurim who went on Merkos Shlichus to Alaska and inspired a young girl at that far corner of the world to light Shabbos candles. As he read the story, he discovered the name of one of the bochurim: it was none other than (Rabbi) Avraham Berkowitz himself.

Mr. Holtz was dumbfounded. Although it took several more minutes, it was clear that he already agreed.

We all owe an enormous debt of gratitude to Mr. Leonard Holtz and his wife Laura Zimmerman for their generous gift ensuring that this precious letter from the Rebbe are now permanently housed in the Rebbes library,” said Rabbi Avraham Berkowitz.

“In Mr. Holtz’s own words to me, ‘We feel the Rebbe worked through us to bring this letter and Rabbi Greenbergs other letters returned to Chabad.’

“They could not be happier that they are now in the best place together with all the other letters of the Rebbe in the central library of Agudas Chabad in New York.” 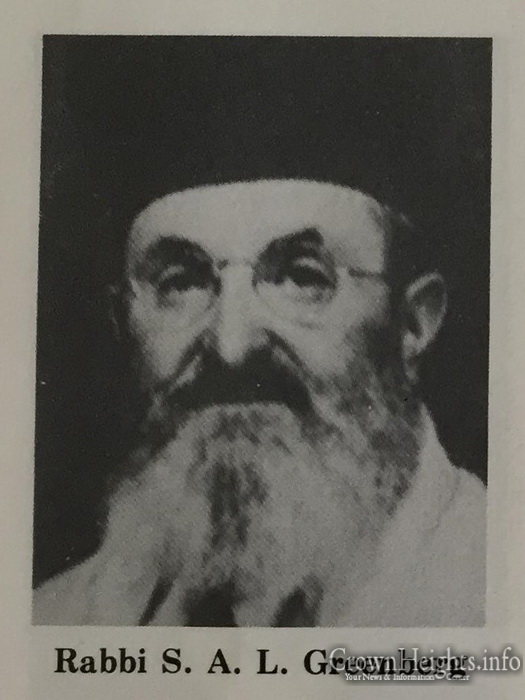 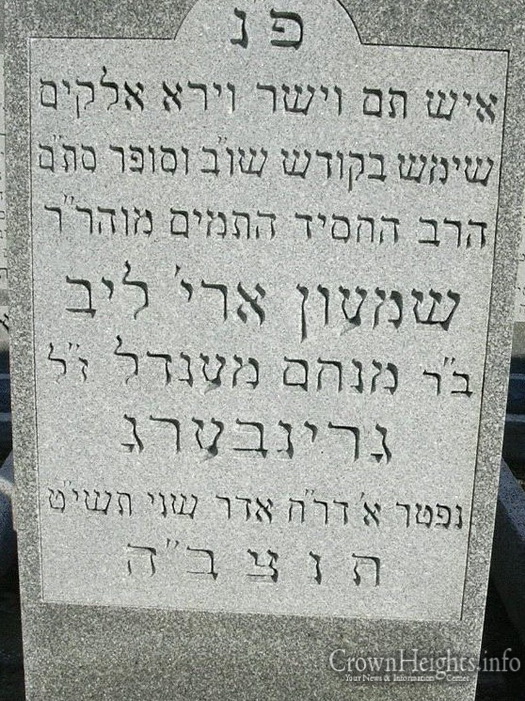 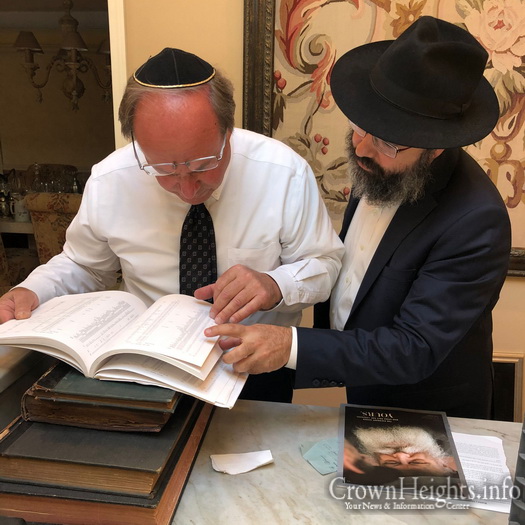 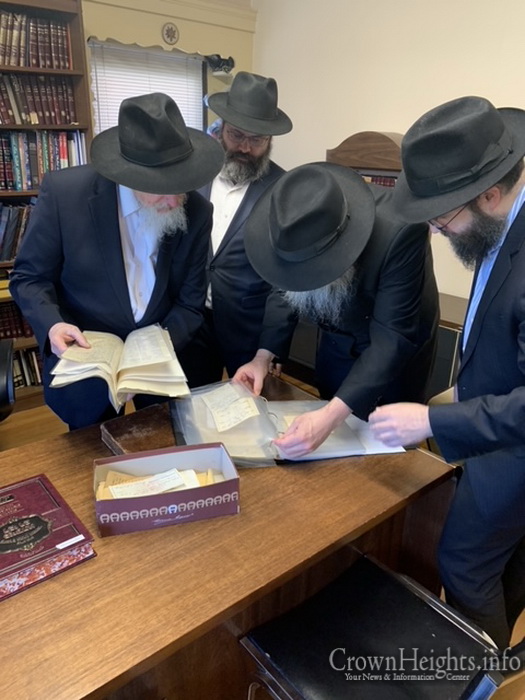 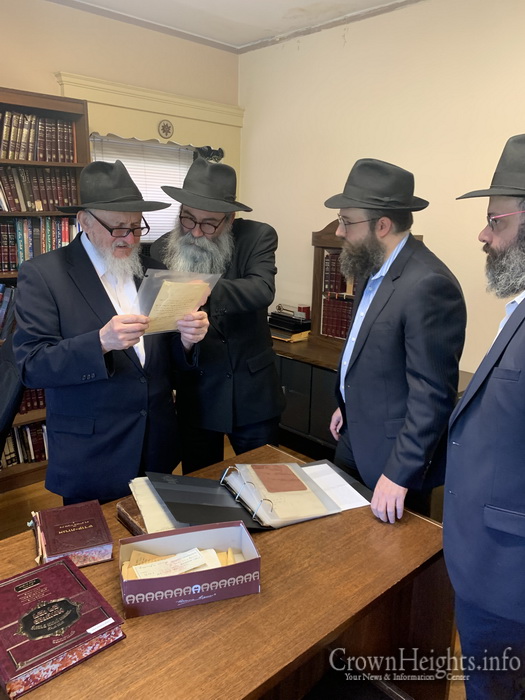 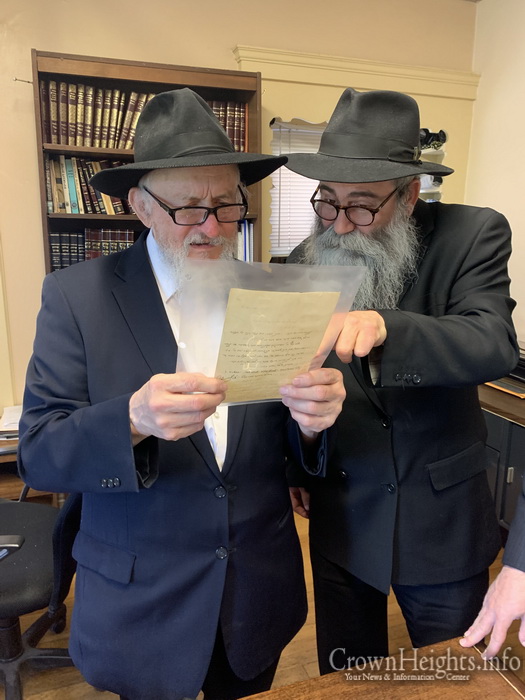 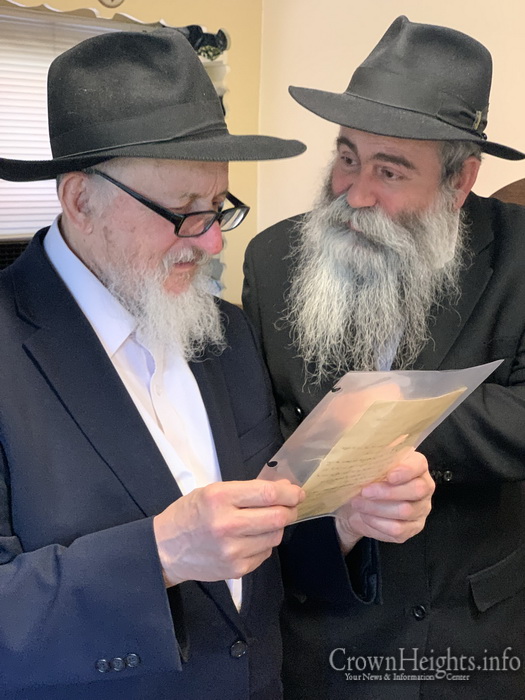 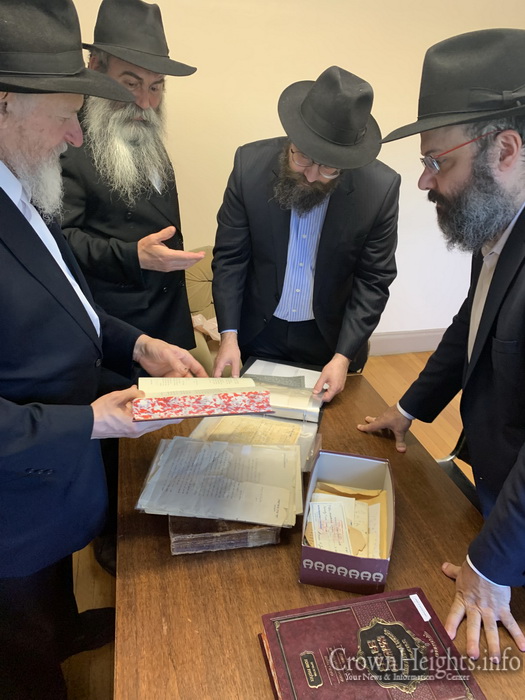 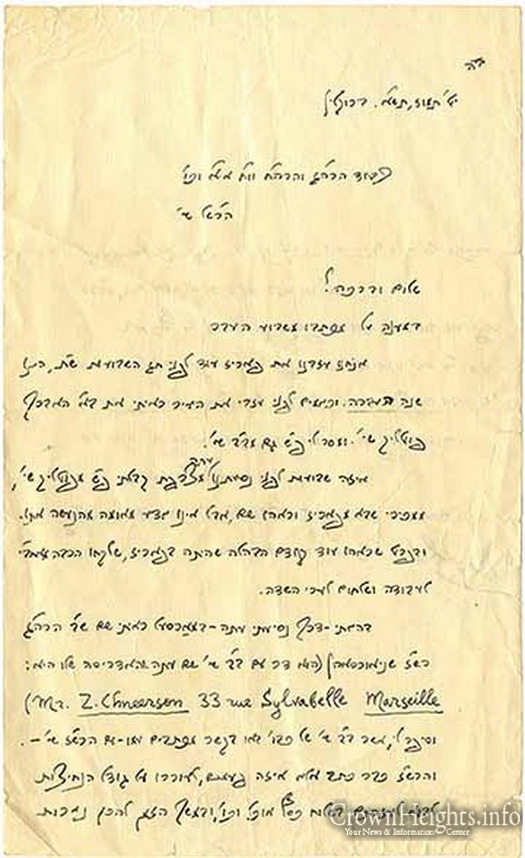 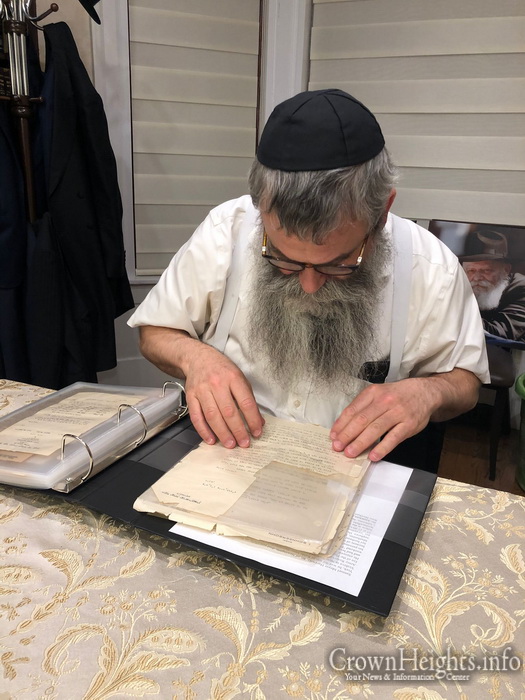 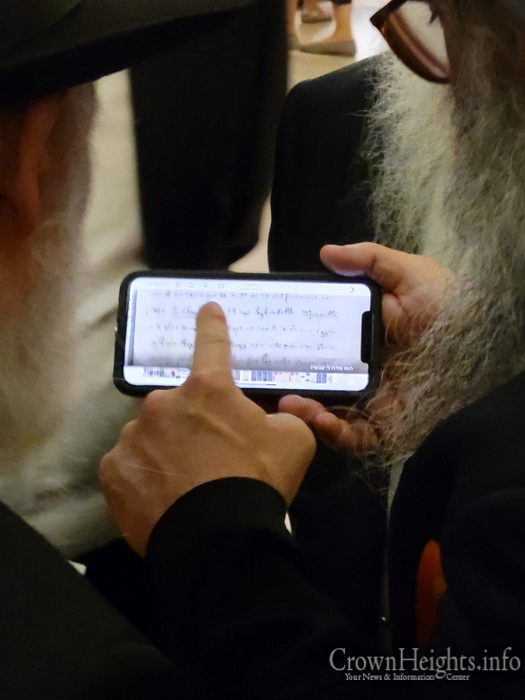 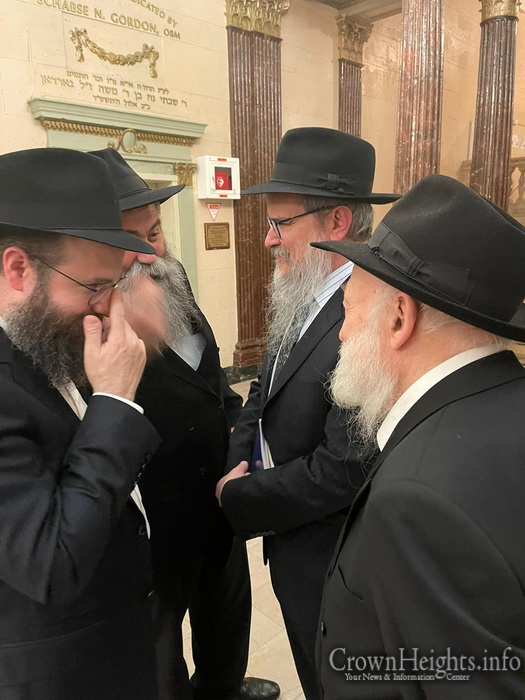 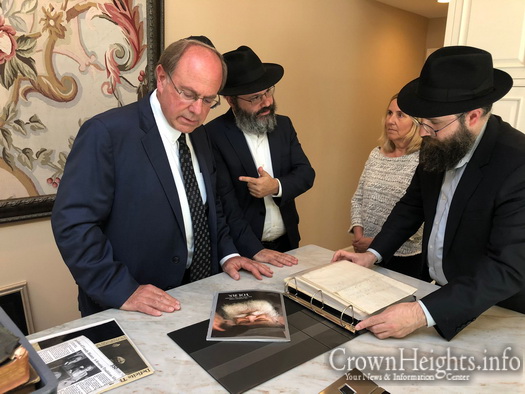