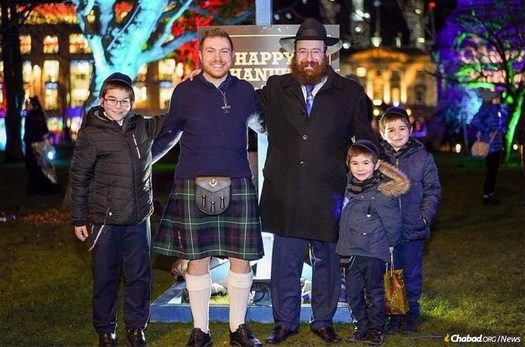 Adam Schwartz, a student at the University of Edinburgh, with Rabbi Pinny Weinman and children last Chanukah.

Filled with elegant medieval architecture, hilly landscapes, lush gardens and a prestigious university that dates back to 1583, Edinburgh, Scotland, will now have a permanent home for vibrant Jewish student life with the building of Chabad’s new center at the University of Edinburgh.

With its first Jewish resident registering in 1691, and only 20 Jewish families living there by the early 1800s, the Jewish community in Edinburgh went on to number in the thousands in the early part of the 20th century. That increase slowly tapered, but Judaism is still thriving today, as hundreds of international Jewish students join several hundred permanent Jewish residents to share in their mutual bond with Judaism at Chabad’s warm and family-like environment.

Adam Schwartz, a student at the university who hails from Montreal, says that Chabad’s close-knit feel and growth-minded outlook have lended themselves to an enriching exploration of his Jewish roots. The warm encounters and inspiration he’s gained from his experience there have made for a deep impression upon him and been catalysts for personal growth.

“Chabad of Edinburgh has played a crucial role in helping me explore my Judaism during my studies in Scotland,” Schwartz tells Chabad.org. “From the High Holidays to a wide range of Torah study classes given throughout the year, Rabbi Pinny and Gitty Weinman have ensured that students are given the opportunities to experience Yiddishkeit. With every event that Chabad holds, students and locals are welcomed and are treated like family.”

In addition to the city’s 1,000 Jewish residents and students, Chabad also provides for the needs of the endless stream of Jewish tourists who pass through Scotland’s second-largest city. Rabbi Weinman says the new center represents a huge milestone for the Jewish community that he and Gitty, co-directors of Chabad of Edinburgh, have lovingly built since 2008: “Until now, we had everything running out of a single space in our home.”

The central location will be a bonus since most of the students at the university are spread out throughout the city, notes Weinman.

Arielle Firestone says that studying in Scotland, far from her hometown of New York City definitely had its challenges. Chabad opened their hearts to her and her fellow Jewish students, and have created what she describes as a “home away from home” for students studying abroad.

“It’s a very warm, welcoming and accepting community,” she says, adding that the delicious food and good company make coming to Chabad feel like home.

Another Milestone in Growing Jewish Life

The new center is yet another milestone for the Edinburgh Jewish community. In 2017, the University of Edinburgh eagerly welcomed the first Torah scroll in its then 435 year history with 150 community members joining together to celebrate this symbol of Jewish pride and heritage with music, refreshments and a captivating LED light show outside the Weinman home.

“Finding a property in such a central location came as the result of much Divine Providence,” says the rabbi. “As a result of the pandemic, opportunities arose, and we were able to buy three adjoining buildings in the center of the city. We are currently working on renovations and are very excited to see this new hub for Jewish enrichment come to life.”

Tom Chesno, a student from Johannesburg, says that Chabad has provided him with many opportunities, including connecting with other like-minded Jewish students. “Chabad offers Jewish students from all corners of the earth a chance to stay connected with their faith, as well as a homey Jewish feeling,” he says. “This new center will mean I have the opportunity to express my Judaism and connect with other Jews.”

“Chabad aims to serve the needs of students on a social, educational and spiritual level,” says Gitty Weinman. “We believe that family and community are both vital keys to character-building, and we encourage our students to take an active part in their Judaism by becoming leaders who spread light and joy to those around them. Every Jew is family here,” she says.