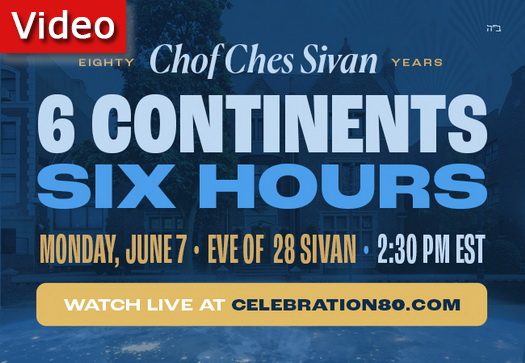 We oftentimes take for granted the Rebbe’s worldwide revolution. On every corner of the globe, and everywhere in between, the Rebbe’s influence is felt daily by millions of Yidden. How did this all come to be?

Chof Ches Sivan is the day we commemorate the Rebbe and Rebbetzin’s rescue from war-torn Europe and safe arrival on U.S. soil. It was on that day that a new era in spreading Torah and Chassidus began, resulting in today’s global renaissance.

In honor of its 80th anniversary, Vaad Or Vechom HaHiskashrus is excited to announce a unique international program that will be taking place on Monday, 27 Sivan, June 7, 2:30 PM EST.

This broadcast will take us through the six continents, highlighting the Rebbe’s impact on each one. Speakers will share never-before-heard personal encounters with the Rebbe, and how his influence is felt in their hometown until today.

Some of the presenters include Rabbi Alfredo Goldschmidt, rabbi of Bogota Colombia, who will be joined by the head shliach Rabbi Yehoshua Rosenfeld in sharing how the Rebbe inspired him in his student years. Rabbi Yosef Aronow will share personal directives he received from the Rebbe regarding his role in Eretz Yisroel. Rabbi Mordechai Avtzon will share fascinating details about his shlichus in Hong Kong. The Grunblatt brothers of Argentina will talk about their upbringing and education under the tutelage of the Rebbe’s first shliach to Argentina, Rabbi Berel Baumgarten a”h. 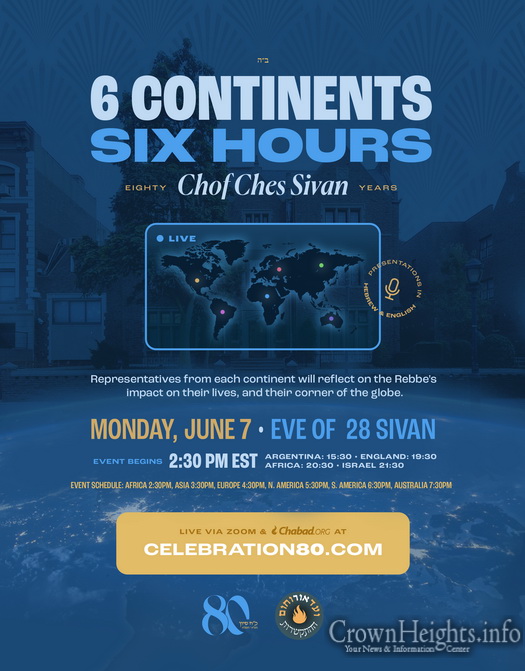