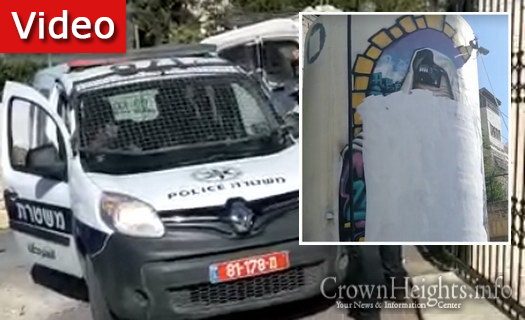 The kever of Rebbetzin Menucha Rachel, the granddaughter of the Alter Rebbe, located in the old cemetery in Chevron, was vandalized, with a mural of the Rebbe covered over with white paint.

The kever, which sees hundreds of people visiting each year, also has a Kollel adjacent to it.

At this time, the perpetrators of the vandalism are still unknown, as well as the motives behind it.

Menucha Rachel was born on the 19th of Kislev, 5559,  the same day her grandfather, Rabbi Shneur Zalman of Liadi was released from imprisonment in S. Petersburg.

As a young woman, Rebbetzin Menucha Rochel suffered a dangerous illness, but her father assured her that she would live move to Eretz Yisroel. In 1845, at the age of 47, Menucha Rochel Slonim and her husband, Rabbi Yaakov Kuli Slonim, decided to make the move, ultimately settling in Chevron.

On her passing, she was buried there in the old cemetery.