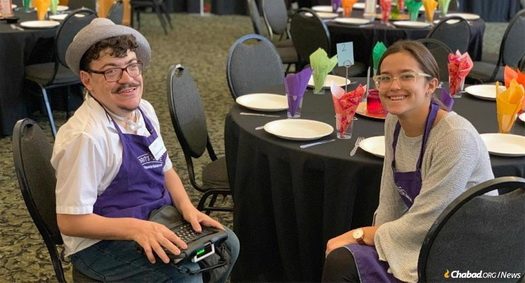 By all accounts, Andrew Lindhardt was a people person. Using a small keyboard to “speak” at Friendship Circle events, he would “work the room.” Smiling broadly and chatting with each attendee, he seamlessly built bridges over the chasm of disability.

By all accounts, Andrew Lindhardt was a people person. Using a small keyboard to “speak” at Friendship Circle events, he would “work the room.” Smiling broadly and chatting with each attendee, he seamlessly built bridges over the chasm of disability.

It was no surprise that when he passed away this month at the age of 32, members and supporters of Friendship Circle of San Diego got together to raise $15,088 to give him a full-fledged Jewish funeral in a Jewish cemetery.

“He was a special guy,” says Rabbi Mendy Rubenfeld, who had conducted Andrew’s bar mitzvah in 2013. “Before COVID, he would come to shul regularly, and brought so much fun and joy with him. He used hand signals and facial expressions and made a unique sound with his lips, with which he would communicate so much. He really stole people’s hearts.”

The funeral had a positive vibe, reflective of how Andrew had lived his life. “Yes, there were tears,” says Rubenfeld, who conducted the funeral, “but there was also plenty of laughter.”

For Andrew, Friendship Circle and Chabad were among the only places where he could be himself, knowing that he was accepted, loved and treasured for who he was.

His connection with the Friendship Circle began when he was 19 years old and his mother, Tara, felt he was ready to learn more about his Jewish identity.

Herself the product of a mixed marriage and married to a non-Jew, she worried about acceptance but hoped to learn more about Judaism along with her sons. She and her family were welcomed with open arms.

As the years passed, Tara watched with amazement as her sons celebrated their brit milah (Andrew took the name Avraham Rafael) and bar mitzvah in a way that was appropriate for them and celebrated their unique contributions.

Andrew was more than just a recipient but an active leader at Friendship Circle. Every year, using his communication device, he would train incoming volunteers about how to work with people with disabilities.

“Andrew was and still is a great teacher,” says Tara. “His care and love and light taught everyone, and touched everyone he came into contact with.”

One of Andrew’s favorite activities was serving as a waiter at Dan’s Place, a program in which young people with disabilities staffed a pop-up monthly kosher restaurant that organizers hope will become a full-time bakery.

This past year, he moved into an apartment of his own, and the Friendship Circle’s Rabbi Shuie Goldstein was there to help him proudly mount a mezuzah on his door.

“Andrew loved doing mitzvahs with passion and excitement,” says Goldstein. “Whatever he did, he did with joy and enthusiasm.”

“You could see his soul shining,” adds Tara. “He brought light and love wherever he went, and despite his considerable disabilities, he expected to and did live a wonderful life inclusively with his Friendship Circle and Chabad community.”

‘It Was Only Natural That We Would Be There for Him’

While he had significant health challenges his entire life, Andrew took a turn for the worse around a month ago and passed away on the second night of Shavuot.

When word of his passing spread, it soon became apparent that there was a problem. The Lindhardt family had pre-purchased plots in a non-Jewish cemetery and to purchase new ones in a Jewish cemetery would be prohibitively expensive. Goldstein knew that he and the family needed to spring into action.

In the days that followed, 180 individuals and families stepped up to ensure that he would be buried in a Jewish cemetery following a kosher funeral, surrounded by his family and friends.

“He had such a great sense of humor and connected with every person,” says Elisheva Green, former executive director of Friendship Circle and now director of Dan’s Place. “It was only natural that we would be there for him now.”