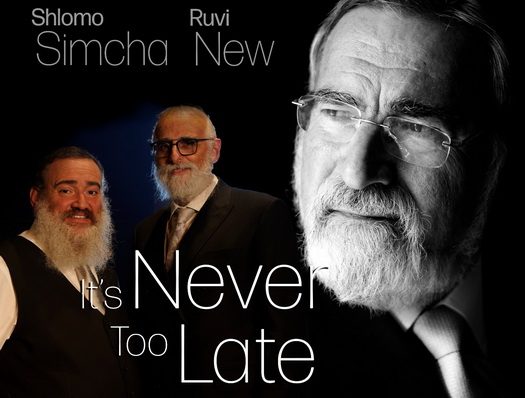 Composed by Yitzy Waldner with lyrics by Rabbi New and arrangements by Yitzy Berry, Never Too Late is an expression of empowerment, optimism, hope and inspiration. Drawing on the well known story of Rabbi Sacks abandoning his career plans after being told by the Lubavitcher Rebbe to devote his life to spreading Torah throughout England as a rabbi, the song is an upbeat reminder that it is never too late to become a leader ,seeing ourselves “as a letter in the scroll”, in the story of Jewish history. The Never Too Late video includes footage of Rabbi Sacks, as well as some of his writings and interactions with world leaders.

Having grown up in Golders Green, Shlomo Simcha has vivid childhood memories of the kiddush Rabbi Sacks threw when he received his semicha, and the two often davened in the same shul. Simcha was excited to be part of Never Too Late, appreciating how it pairs popular-style music with sophisticated words that reflect the profound and deep concepts that Rabbi Sacks often shared.

“The song gives a strong sense of his teachings and a message we all need to hear about recognizing the power we all have as individuals,” said Simcha.

“Rabbi Sacks had the unique ability to relate the Torah’s truth to contemporary life and society,” added Rabbi New. “His speech at the Kinus HaShluchim in 2011 was electrifying and will be long remembered by all who were there. Elements of that speech as well as his writings, inspired this song. As one of the most eloquent teachers of Torah in our time, it feels appropriate to release a tribute song in his memory just before Shavuos, when we celebrate the Torah and renew our connection to Torah.”