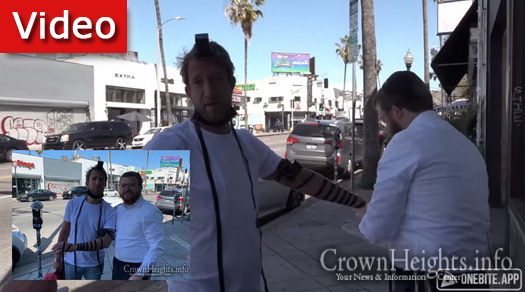 David Scott Portnoy, an American internet celebrity, blogger, and founder of the sports and pop culture blog Barstool Sports, went viral in the Jewish world after a photo circulated of him putting on Tefillin with a Lubavitcher on an LA street.

While a proud Jew, which he likes to remind people on his shows, David had never put on Tefillin, making this time technically his Bar Mitzvah.

When the photo first circulated, many people theorized that he must have been caught on someone’s Friday Mivtzoim route, or something along those lines, but the truth is actually more interesting than that.

In his most recent release for his “Barstool Pizza Review,” David featured a non-Kosher Pizzaria located in the center of one of the Jewish communities. Just minutes after the video begins, David is accosted by a Jewish man, who presses him on local issues, which after a minute of discussion, David brushes off as not interested.

Despite this, after giving the Pizzaria an awesome 8.1 rating, David comes face to face with a Lubavitcher and a pair of Tefillin. A one-minute promise later, David is standing for a photo with his new Lubavitch friend, all wrapped up in Tefillin.

“I did a Pizza Review and got a Bar Mitzvah all in one heartbeat here,” David said on camera.

The incident was considered important enough for David that he even added that he had a “Bonus Bar Mitzvah” to the title of his video review.