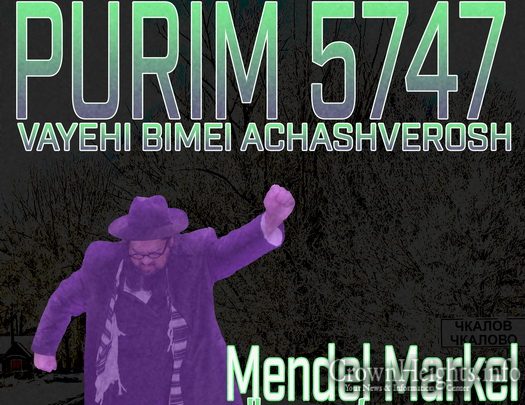 A new EDM dance release by Chabad singer and producer Mendel “der Baal Menagen” Markel, in time for Purim. “Purim 5747 (Vayehi Bimei Achashveirosh)”, which includes excerpts from a Sicha the Rebbe gave on Purim 5747, about every individual being involved in Inyonei Moshiach Ugeulah and the need to strengthen the campaign to bring Mitzvos Bnai Noach to all humanity.

In this Sicha (please note this is paraphrased according to Mendel’s limited understanding of the Sicha, for the actual Sicha, see below), the Rebbe stresses the true and complete redemption is dependent on the actions of every Jew, big or small. The Rebbe brings the Halacha from Rambam that “one action, one word, one thought, brings redemption on oneself and on the entire world”. We are on the final threshold of Moshiach and crossing it depends on every individual. When Jews get together, we need to remind them that by adding a single good deed, and certainly when good deeds are done with more people together, this one deed can be the “final nail”, which according to Halacha the “final nail” changes the entire situation in one instant.

The Rebbe speaks of the Frierdiker Rebbe’s intense campaign, even against heavy opposition that caused him extreme hardship, to spread the idea of “Immediate repentance will bring immediate salvation”. He made the campaign with a big “shturem”, instructing that this message be printed and publicized far and wide.

Futhermore, we must also bring Moshiach to the entire humanity. Moshiach’s coming is connected to changes in the entire world and we have seen great changes for the good in the world. The Rebbe stresses the importance of spreading the Seven Mitzos Bnai Noach to every single human. The Rebbe explains that, unlike in the past, not only is it possible to influence the non-Jew, but aderaba, they will appreciate it. By influencing them to accept Hashem and telling them they can make the world a better place by accepting the Seven Mitzvos, they see that we care for their well-being. Furthermore, the Rambam uses the expression, ‘lakuf (‘to forcefully influence’) all inhabitants of the world to accept the Noachide commands.’ Although obviously one must do this in a pleasant, gentle, and peaceful way, it still must be done with persistence. If you have already tried several times, try again nevertheless.

Check it out for yourself:

Video of the full Sicha https://youtu.be/IuGLVxnDZtA